After growing up with the sensational jane's on the common, Jenna Mooers is carving out her own identity. 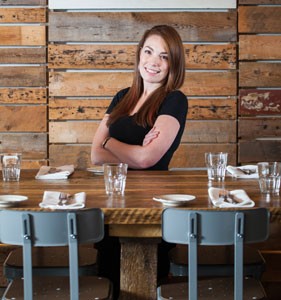 Jenna Mooers can pinpoint the moment she fell in love with the restaurant industry. "I was in grade nine," she says. "And it was midnight, painting the black chairs hoping they wouldn't be tacky in the morning."

The chairs were for jane's on the common, which her mother Jane Wright opened in 2003. Those chairs are now tucked into tables around the dining room in EDNA. Wright has even been known to joke: "Have you met my grand-daughter, EDNA?"

"I saw it all, step by step, with my mom," Mooers says. "All through high school I learned what it was to run a restaurant and be a small business owner and learn it's not so much a job as it is a lifestyle."

Mooers is very much her mother's daughter. She is bold and entrepreneurial, there is a sense of joy that permeates every word she speaks about the restaurant and the community that surrounds it.

It is also clear that EDNA is essentially a branch on their family tree—you can see the lineage, not only in Mooers or the chairs, but in the way the restaurant embraces its neighbourhood, and vice versa.

But at the same time, Mooers is also carving out her own identity. She's expanded on the restaurant concept, creating a chic neighbourhood local where you can pop by for a glass of wine or a cocktail.

EDNA itself is a modern space, made cozy with vintage flourishes. In the centre of the restaurant, the more boisterous bar area is given a personality separate from the two quieter dining areas in the front and back, with reclaimed wood that curves up the wall behind the long stretch of a communal table, across the ceiling, over the sprawling bar. Subway tile, pipe work and the dark gleam of wood are given warmth by globe lights and an architectural chandelier that runs the span of the communal table. Eames-style barstools and painted metal barstools bring more character to the space.

Those old black chairs from jane's are tucked into solid, woody tables from old A&W restaurants.

Her vision for the food, which she shares with EDNA's chef Robert Reynolds, is a simple one: fresh, local and creative. The menu regularly features fresh oysters, charcuterie from her neighbours across the street at Ratinaud and soups and salads made from market vegetables. A butcher's cut and daily specials like line-caught swordfish depend on market availability and freshness. The menu rotates daily, an exercise in freshness itself.

Her vision for the restaurant is simpler still: community. "I lived in Montreal for eight years and lived all over the city in many different neighbourhoods and I found that no matter where I lived in that city I always had a local restaurant, a local coffee shop, a local grocery store—somewhere I could walk to, that was in my neighbourhood," says Mooers. "So that was an experience that I was really happy to be part of in Halifax.

"Traditionally it's quite separated," she says of the city. "You know, we've got our downtown core and we've got this huge residential area...and with the exception of the Hydrostone Market and Quinpool Road there wasn't much mix of commercial and residential. And that's what I think really creates community: it allows people to walk around in their neighbourhood and bump into their neighbours and meet their local business owners and on and on. So I was excited to be a part of that and I can really feel it on Gottingen Street."

The welcome from the neighbourhood has been a warm one. "It's amazing for me to experience," she says. "I would say, 75 to 80 percent of the people who walk in these doors say 'Oh, we live up the street,' so they're really, really excited to have something in their neighbourhood that they can walk to, where they can get a glass of wine or a locally sourced dinner and not have to take a cab downtown or worry about driving."

It sounds like a no-brainer. But Mooers hasn't been taking it for granted, and as much as the neighbourhood is delighted with EDNA, her delight is equally apparent. "I feel like I'm surprised every day," she says. "This job is so amazing, and it's so social and you get to connect with so many people. And people surprise me every day. I don't know exactly what I expected it would be like, but it's crazier—and better—than I guess I even thought it would be."