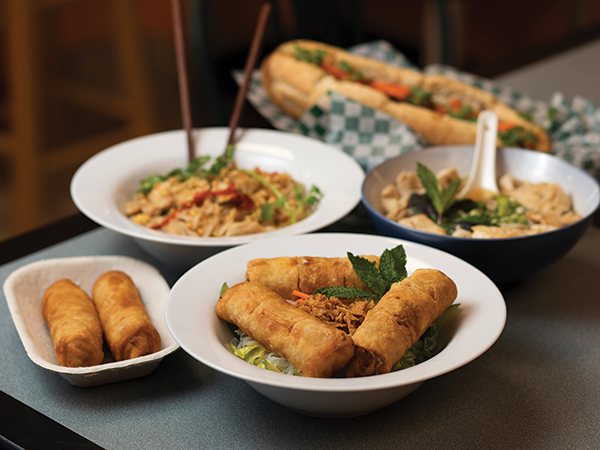 RACHEL MCGRATH
Dzung Do says her restaurant Just Spring Roll has given her a sense of creative freedom by showcasing Southeast Asian staples like spring rolls, pad thai, vietnamese soup and bahn mi.

F or almost 20 years, Just Spring Roll has remained a hidden gem on the bottom floor of Park Lane Mall. In that time, the restaurant has gained a loyal following of customers (and Park Lane moviegoers) craving homemade Southeast Asian staples such as Pad Thai and spring rolls.

"We do everything to make sure the food is served quick and hot with healthy ingredients," says owner Dzung Do. "I cook for my customers as I cook for my family."

Do moved from Vietnam to Nova Scotia two-and-a-half years ago with her husband and two children to make a new life. "I'm really happy here," she says. But Just Spring Roll itself goes back nearly two decades, having started with sisters Ann and Diem Tran. With more than 30 years of experience in the restaurant industry, Ann owned two large restaurants in the 1990s before opening Just Spring Roll.

"If I want to try something new, like the banh mi, I can introduce it to customers and change it to make sure the customers like it. I love to introduce Vietnamese food to Canadians."

Do and her family visited the restaurant in 2018, where they first met Ann. "She said she wanted to take a rest," Do says. "Diem had cancer in 2017 and Ann had a mini stroke in 2018. That's why she wanted to sell the business to me." It only took Do one day to decide that she wanted to take it over.

"I love to cook and I really wanted to make something that was my own," she says. Ann taught Do how to make all the menu items, passing along her and Diem's knowledge before stepping away for a well-earned break. She can still be spotted every now and then at the restaurant, helping Do in the kitchen.

Today, Do makes every spring-roll wrapper by hand, ensuring that each one is thick and crunchy. For her wonton and pho soups, Do makes homemade chicken broth that simmers on the stove for at least six hours. Each meal is made to order, and she believes that the quality is worth the extra bit of effort: "I don't care if it takes a long time. I love to do it," she says.

Do has worked hard to maintain the dishes that customers have come to expect over the years, while offering her own personal touches. She added banh mi sandwiches and pho soup to the menu—two Vietnamese staples. Her banh mi sandwiches come with your choice of one of two buns: crunchy or chubby. The crunchy bun, the traditional option, is a French-style baguette that gained popularity in Vietnam during the mid-19th century. The chubby bun is a smaller, softer bread— similar to a sub bun—for customers looking for a lighter meal.

"Because I have my own restaurant, I can decide what I want to make and what I want to change," Do says. "If I want to try something new, like the banh mi, I can introduce it to customers and change it to make sure the customers like it. I love to introduce Vietnamese food to Canadians."

Do says owning a restaurant has given her a newfound sense of creative freedom. She enjoys using feedback from customers to experiment with her recipes. "I love to make things better for my customers," she says, intent on finding the middle ground between authenticity and creativity.

"I'm really happy when I clear away people's plates, and they're clean—all the food is gone," she says. "That means the customer enjoyed it. That's what I love."