How to build your cat a plaything without breaking the bank. 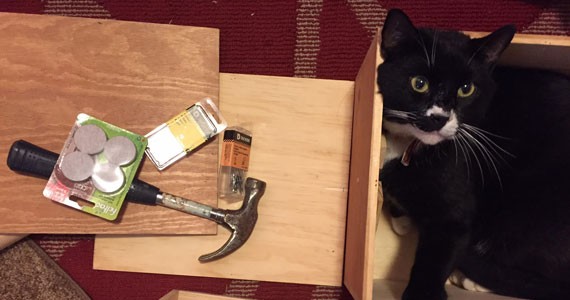 It's one thing to be an indebted post-grad using curb sides and Kijiji as the primary avenue for acquiring furniture, but where does one go to purchase furniture for a feline?

Cat furniture: Little clawing posts and basket trees and hammock swings. These things are costly. Like, half-your-rent costly. I know. I don't get it either. Wouldn't it be easier (and cheaper) to just grab some wood and carpet scraps and make some cat furniture all your own?

I grew up strictly a dog person. My nana had a cat named Tigger that was 145 years old and he was so old and cranky and hissy and pissy and all I wanted to do was squeeze him and love him. But he felt I was inferior, unworthy, et al. So, I went on living my entire life building up walls. Cat walls.

Until one day, a timid tuxedo waltzed into my life and into my heart forever. Now he is my one true son. The fruit of my life—the Cat to my Stevens.

So anyway, I built him a thing. I also drank a bottle of wine. Kind of a Drunk History meets Home Improvement project.

When I first began my search for a DIY cat-thing instructional, I realized projects seem to fall into one of two categories: 1) Projects that are very complicated and unrealistic for a human such as myself (involving power saws, compasses and genuine dedication); 2) Projects that produce painfully simple heaps of junk (two cardboard cylinders stapled together). So, I found a happy medium—a plaything made out of wine crates (half the work was already done). Among the thousands of Pinterest options, I chose to go with one labelled DIY Cat Tree with Wine Crate, because it gave me a warm, trusted feeling.

After picking up two discarded vino tinto crates from the NSLC, I snatched some carpety bits from the local dollar store and then bought some nails from the hardware store. If you're looking for a type of nail to reproduce these results on your own, tough luck—I bought two different kinds, which I used, completely arbitrarily, at random throughout the construction process.

Pulling up a photo of the wine crate inspiration on Pinterest, I got to work. Indulging in a bottle of cheap red wine and completely ignoring the tutorial's steps, I proceeded solely off the general vibe of it all.

For about two hours, I was aggressively nailing wine crates together, bursting into intermittent arguments with my boyfriend (bless you, Mark) and challenging my cat to "just GO INSIDE IT" between every 10 minutes of progress. The upstairs neighbours definitely dug that.

I ended up doing a not-terrible job of making a wine crate cat-tree, if I do say so myself—upholstered with crappy, cut-up carpet on its interior, all-purpose craft glue seeping out from underneath it and hastily-nailed metal pins jutting out from its sides. The cat sort of likes it (I think?), but also sort of couldn't care less about anything in his entire life.

Despite all this effort, time and steady sloshing of red wine, the cat's attention is sooner stolen by a simple toy I'd made for him earlier that same day out of three paperclips and a clothespin, linked together and thrown on the floor.