Propeller collaborates with bartender Shane Beehan on a new cocktail in a can. 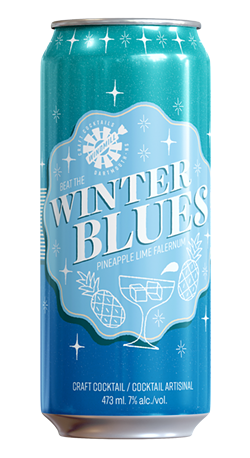 Propeller Brewing Co. is fighting the winter blahs with Winter Blues, the first in a new line of canned cocktails. The veteran brewer teamed up with lauded local bartender Shane Beehan for the debut in its Windmill Craft Cocktails series, which officially launched last Friday. Beehan, who currently mixes drinks at Lot Six, has been a fan of Propeller’s beer for years, so he was thrilled to help his favourite brewery come up with something new.

For Winter Blues, Beehan was largely inspired by “tiki bar culture,” which dates back to the ’30s and ’40s.

“The idea was that it brought the tropics to you—it offered you this exotic experience wherever you are,” says Beehan. “That was kind of what our driving force was.”

The result is a rum-based beverage featuring falernum: a Caribbean syrup with flavours of toasted almonds, warming spices, lime and ginger. “For me personally, in the bar world, it’s one of the most unique flavours you’ll ever come across,” says Beehan. The bright blue-green colour is a pretty unique look, too.

Winter Blues is a limited-edition cocktail only available at the Propeller storefronts and private liquor stores. Propeller plans to turn out more Windmill Craft Cocktails, including both limited-edition and year-round offerings. Perfect Storm—a Propeller-made rum and ginger beer cocktail, released in late summer 2018—will be rebranded to fit into the line, with additional new releases to follow.