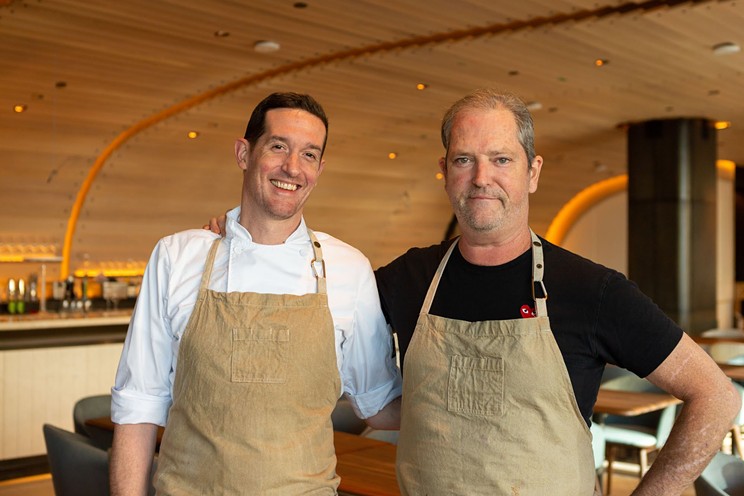 Submitted
Chef de cuisine Jamie MacAulay (left) and chef Anthony Walsh are the duo behind the culinary vision at Drift.

W alking into Drift feels almost like entering a museum of east coast culture, and it’s exactly the type of atmosphere the team wants to exhibit. Celebrated chef Anthony Walsh is part of the team that’s shaping the restaurant’s Atlantic Canadian-focused menu, calling Drift his “culinary love letter” to Nova Scotia and the east coast. It’s a passion for the region that fuels the direction of the new Halifax restaurant, from the decor to the drinks to every plate of food.

“Down here, the calibre and the quality and the people is very authentic—truly Canadian, I think,” Walsh, who’s known for opening dozens of restaurants across Canada, says. “There’s a certain calmness and understated elegance to the people…that’s been my experience so far.” 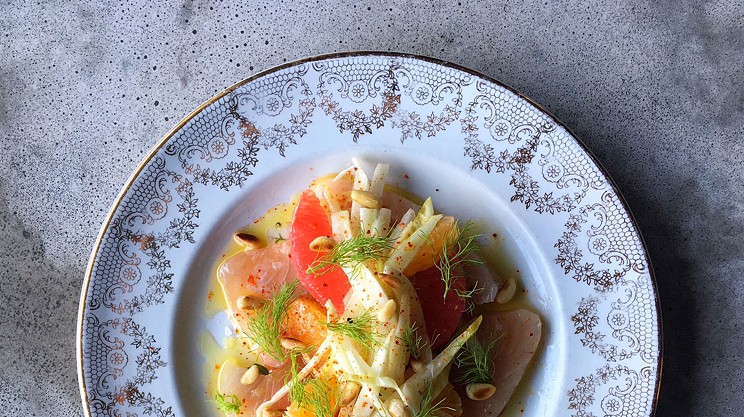 A night at Bar Kismet: Call it greedy, but we’d really prefer you don’t go to Bar Kismet so there’s still room for us.

Walsh rose to prominence in the culinary world as the executive chef of Canoe, helping the downtown Toronto restaurant rise to fame in the industry. Now, he’s taken on the chief culinary director role at the Halifax waterfront’s Queen’s Marque—a $200-million dollar multi-use development at 1709 Lower Water Street—where he’ll shape the direction of its food and beverage businesses.

On Friday, Drift opened as the first of several restaurants Walsh is working on for Queen’s Marque; Drift’s located in the development’s Muir hotel, which opens to guests December 10. By reinventing classic Atlantic Canadian dishes with an innovative, upscale approach, diners can get a modern taste of the flavours that many people raised on the east coast reminisce about when thinking of home.

The Coast
The Newfoundland bluefin tuna tartare at Drift is topped with flavourful ingredients like crispy black olives, dried tomatoes, pepperoni from Brothers Meats and Delicatessen and spicy ‘nduja sausage.

One of the star dishes is the modern Nova Scotian hodge podge, a stew that typically features various vegetables in a buttery cream sauce. Drift elevates the classic east coast dish with wax beans, root vegetables, seared scallops and flaky haddock in a mint green creamy sauce. The restaurant also offers an Atlantic Canadian spin on a tuna tartare using bluefin tuna from Newfoundland and mixing it with flavourful ingredients like crispy black olives, diced tomatoes, spicy ‘nduja sausage and pepperoni from the north end’s Brothers Meats and Delicatessen.

Other dishes on the restaurant’s menu don’t drift far from local culture and cuisine. These include a Nova Scotia lamb roast served with sesame potatoes and sweet turnips; a Yarmouth lobster pot pie with buttered rutabaga, tarragon and peas; and a molasses cake covered in whiskey sauce, local sea buckthorn and caramelized white chocolate. It’s an effort to showcase the distinct flavours of the east coast and help put Atlantic Canadian cuisine on the culinary map.

“It’s a combination of using what’s local and showcasing what we have here, as well as incorporating some traditional dishes from the Maritimes without elevating it past the point of not being recognized,” says chef de cuisine Jamie MacAulay, who was behind past Halifax restaurants Water and Bone and Coda Ramen. “You should be able to sit down and be like, ‘It’s a hodge podge.’ Not, ‘It’s a “hodge podge”’ with air quotes.” 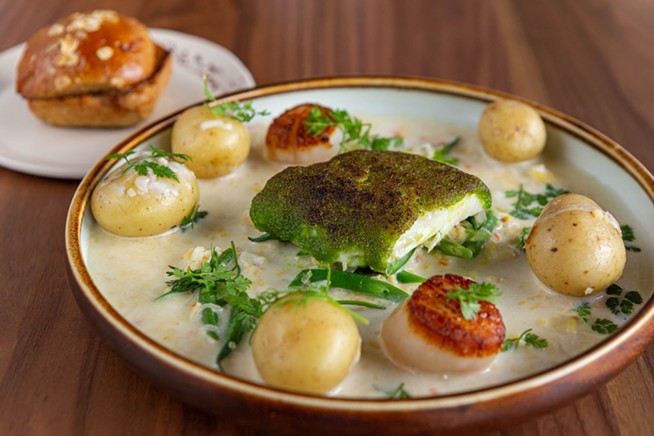 Working as a duo, MacAulay and Walsh bring contrasting backgrounds to the restaurant. MacAulay was born and raised in Nova Scotia and has spent several years working in the local culinary industry. Walsh, on the other hand, has opened 40 other restaurants with Drift—his 41st—being his first in Atlantic Canada. “He has been instrumental in regards to helping me,” Walsh says of MacAulay, “with introduction of course, but understanding also this ‘new Nova Scotia.’ Now is a great time to be here.”

Despite spending 25 years of his career in Toronto, Walsh fell in love with the natural ingredients found in Atlantic Canada. After visiting Nova Scotia six times over the past 18 months, his adoration for the province and its natural bounty quickly grew, and he became fascinated by the quality of ingredients found in Nova Scotia. From the seafood—such as oysters, mackerel and halibut—to foraged plants like haskap berries, sea buckthorn and chanterelle mushrooms (which he calls some of the best in the world), Walsh says it’s a list of ingredients that “goes on and on and on.”

The passion for Atlantic Canada’s culture extends into the other aspects at Drift. Most of the art, including several oceanic paintings and nautical-style sculptures, is made by local artists. Some of the plates were also crafted by Indigenous interdisciplinary artist Undine Foulds who’s currently residing in Lunenburg. Behind the bar, there’s also a distinct spotlight on Nova Scotia wineries and distilleries.

The Coast
The curved ceiling at Drift is inspired by the hull of a wooden ship.

Drift’s wine list focuses on low-intervention wines with a raw, natural style; the restaurant’s team wanted to especially showcase local wineries such as Lightfoot and Wolfville Vineyards and Grand Pré Wines. They also wanted to have something for every customer while avoiding mass-produced wines.

The restaurant’s cocktail list also maintains that Nova Scotia focus. One of Drift’s signature drinks is the lavender-coloured Seafoam Royal Gin Fizz; it’s a cocktail that uses lavender from the Seafoam Lavender Company’s stall at the Halifax Seaport Farmers’ Market and gin from the north end’s Compass Distillers.

While Drift is just newly opened, Walsh says he wants to listen to the community and its customers, crediting that open-mindedness to how much progress the restaurant has made. “We just want to be a part of the landscape,” he says. “We just want to do what we do. We know we’re only as good as our last dish or our last cocktail.”