Google Maps
There’s no indication exactly how many floors the future development will be, but a past concept drawing shows 22 floors.

Develop Nova Scotia issued a request for proposals for land that’s allowed to have a building 20+ storeys tall.

On Tuesday, Develop Nova Scotia announced an affordable housing development for downtown Dartmouth. Currently a parking lot with enviable waterfront views, the property on Alderney Drive between Prince and King Streets will soon be a mixed-use building, likely towering over nearby buildings.

“That parking lot doesn’t really serve much of a use to anybody,” downtown Dartmouth councillor Sam Austin tells The Coast. “It’s been vacant for decades.”

But just how long it will take and what the building will look like aren’t clear. The official request for proposals was issued Tuesday and submissions are open until March 28.“This is an exciting chance to see more accessible and affordable housing in the heart of downtown Dartmouth,” housing minister John Lohr is quoted as saying in the release. The zoning in the area permits a wide range of land uses that could include residential, commercial, institutional, cultural, park and community facilities on the land in the future.

But this being an affordable housing project, housing is the main goal. The application process is open to a variety of groups, including not just developers but also Indigenous governments and organizations, community housing organizations, non-profit organizations, registered charities and co-op housing groups.

“Partnerships and/or joint ventures are strongly encouraged and responses that include community non-profit and/or non-market housing sector partners will be prioritized,” reads the 16-page document released by Develop Nova Scotia (the provincial crown corporation was called the Waterfront Development Corporation until 2018). 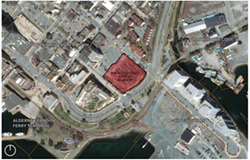 The land itself is 5,375 square metres, taking up one whole city block. The development can be a maximum of 90 metres high. Floor height could vary slightly by developer, but a previous concept drawing from Lydon Lynch in 2012 shows 22 floors. For comparison, King’s Wharf is already expecting a 34-storey tower called The Maristella in the coming years as well as a 27-storey development. Halifax’s tallest apartment building, The VUZE (formerly Fenwick Tower) has 33 storeys.

Austin says the 2012 proposal didn’t work out for a few reasons. “[Develop NS] had kind of floated some initial thoughts and concepts for it, as I recall I think there were some public meetings on it at the time,” he tells The Coast in a phone call. “But it just didn’t proceed, and part of that was updating the downtown Dartmouth plan.”

But now with the approval of HRM’s Centre Plan, a new development won’t have to get individual approval and face a public hearing to be approved as long as it’s within the limits set out above. “If they build within the rules then they shouldn’t have to come to council at all,” Austin adds.

The Develop NS documents say “the site can be developed as one lot with one building or accommodate multiple buildings through an innovative approach to design, subdivision and ownership.”

Requirements for applicants include a dedication to objectives like inclusiveness, accessibility and, as the name states, affordability.

“Targeting affordable housing to moderate-income households remains an important piece of the housing spectrum where, under current conditions, the market alone is failing to address,” says the document. “Moderate income housing targets households that are ineligible for social housing yet are increasingly priced out of the rental market.”

The document defines “affordable” as housing that costs no more than 30 percent of gross income for households earning at least 60 percent of Area Median Income. The call for proposals says according to the 2016 National Household Survey, the Halifax the AMI is currently $69,452. A household earning 60 percent AMI would be bringing in about $42,000 per year, and spending no more than 30 percent of that on housing would allow a maximum rent of $1042 per month. At the top end of the AMI range, a household could pay $1,736 per month on rent and it would be considered affordable.

Councillor Austin acknowledges that while that’s not “deep affordability” that would require government intervention, it is “certainly less than a lot of places are going for” in his district. “A thousand dollars for a place—that has become hard to find,” he says. According to a national rent report from earlier this month, the average rent for a one-bedroom in HRM is $1,473, and $1,869 for a two-bedroom.

In terms of physical accessibility, any new multi-unit development has to meet government-mandated standards, but applicants for this project are “encouraged to exceed both minimum accessibility standards, as well as total number of accessible units constructed.”

Energy efficiency, on the other hand, seems less of a requirement and more of a suggestion, as applicants are “encouraged to consider net-zero performance targets.” What won’t be required in the to-be-transformed parking lot is—perhaps ironically—parking.

The process is only just getting underway, so “detailed architectural drawings” aren’t required by the March 28 deadline. Conceptual sketches and preliminary schedules are expected, though, as are the number of estimated units and unit types, along with estimated construction costs and project financing details.

After all the initial applications, Develop Nova Scotia will announce a shortlist in April and move to the second stage of the process sometime in May, meaning the building itself is likely still a long way off. But at least Dartmouthians in the market for a new, somewhat-affordable rental will have something to look forward to.