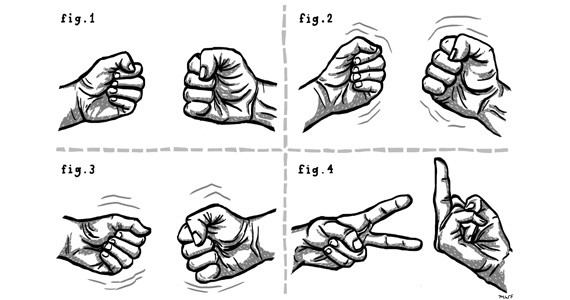 Uncle Greg moved into the guestroom partway through December. He was in what he called a tight spot, by which he meant the spot between not being able to work and the spot when he won his case. Uncle Greg had been working as a courier and taken a nasty spill on a woman's frozen front steps. He was taking her to the cleaners. Though he cheerfully referred to himself as a cripple he seemed to get around pretty good, taking walks around the block so he could smoke and I think drink. It was usually when he felt like having the couch and TV to himself that his back started to act up.

Once I came into the living room, because the Grinch was on, but Greg was draped on the couch watching a show about alien abductions. He offered to rock-paper-scissors for the couch and TV. We pounded our fists in our palms like we wanted answers. I came up with scissors and Greg flipped me the bird.

The guestroom doubled as the computer room then, and whenever I wanted to use the thing I had to knock. Greg kept the door closed and locked.

"Don't come in here!" he'd shout from inside. "I'm wrapping your Christmas present!"

Twenty minutes later he'd shoo me off the couch, saying "All yours." Wanting the computer for an hour meant I'd lose the TV for the whole night.

I was 11 and addicted to this shooting game on the computer where you stalk through an old German castle killing the Nazi guards that jump out at you. Because I never reached the end, I never knew why I was in the castle, never knew what I was supposed to find. For months I was all about this game, but never got very far because I couldn't bring myself to shoot the German Shepherds that mauled me.

After a few deaths, I'd go onto the internet and look at the sites Greg had been on. He looked at old crime scene photos and celebrity mug shots. He looked at pages giving instructions on how to make bombs with cleaning products and how to drill a hole into your own head. He looked at a lot of naked women, which I tried to look at, too. But I could usually only download a head and shoulders worth of a picture before a thump came from somewhere in the house and I panicked and turned the computer completely off.

On my way out of Greg's room, I did my best to see, without rooting or disturbing, any sign of this Christmas present Greg was always wrapping for me. Greg's luggage was garbage bags, filled mostly with clothes. I nosed a few layers deep and found only little bottles of alcohol and Fangoria magazines. The closet was full of my older sister's clothes still, which mom didn't have the heart to throw away yet and which I could only bare to open up and look into. I don't think Greg would have dared hide any present in there.

Uncle Greg's tight spot lasted until late March, when it came out in court that he had been in cahoots with the woman he was suing's daughter, who had iced the steps the night before Greg's crippling slip. Their plan was to split the settlement. The defense lawyer caught him making phone calls to the daughter from our house, from the private line in the guestroom that had been my sister's, which no one had thought to cancel.

From that point on, Uncle Greg became someone I was capable of growing into if I wasn't careful. Stuff I'd do or say would remind my mom of her brother and she'd warn me. "You don't want to turn out like your Uncle Greg, do you?" Although I'm sure Uncle Greg never planned on turning out like Uncle Greg. Some things just can't be helped. Some things just happen.

On Christmas morning Greg was feeling crippled again, stretched out the length of the couch while me and my mom sat cross-legged on the floor. The morning had been a satisfying let down where I only got things I asked for, no surprises. Greg didn't get anything because he was getting a food and a roof over his head. While we opened our presents he smiled and yawned and rubbed his eyes, more excited than we were to find out what we got.

"I guess I'll clean up," my mom had said, starting to pick herself up from the red and green garbage of our gifts.

Pointing from there on the couch he directed me behind the tree where I found a long, slim box wrapped in the scraps of a few different patterns of paper. It had no weight to it, no rattle when shook. The tag said "To Pickle Dick, Love Greg."

"What'd you get me?" I looked up at Greg. I hadn't actually expected anything from the guy.

He grinned and shrugged and bulged his eyes at me. And he kept smiling as I disassembled his wrap job, looking excited like he himself couldn't wait to find out what he'd got me.

Andrew Hood's second collection of stories, The Cloaca, will be released in April 2012 by Invisible Publishing.