Quantity over quality fails to impress at The Muster Station. 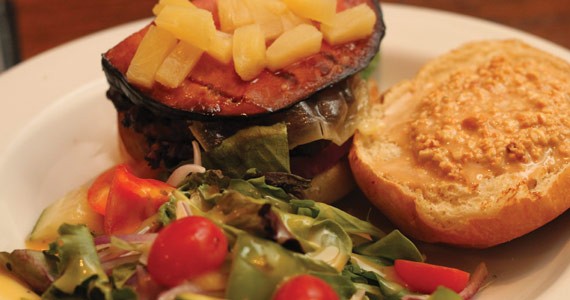 There's a great moment in The Princess Bride when Inigo Montoya, in response to Vizzini's insistence on using the word "inconceivable," says, "You keep using that word. I do not think it means what you think it means."

The Muster Station is a restaurant in Dartmouth. "Lets [sic] Get Together," the awning says. Because a muster station is where people get together. Sure, they're getting together to collect life vests in an emergency, but hey! It's a get together!

The confusion at this restaurant doesn't end with its name. My first visit is for lunch. There are only a few other seated tables, and one server split between two near-empty rooms. Our meal takes almost two hours.

We start with calamari ($9). It's cooked well, the accompanying tomato chili sauce has a nice bite and sweetness to it, but it's served on a pile of soggy greens. The calamari is better, though, than the steak sandwich ($11), Big Kahuna stack ($12) and pulled pork ($8.50), which run the gamut of meh to awful.

The steak in the sandwich is cooked well and served with a side of deliciously buttery, garlicky mashed potatoes. Unfortunately, it's near room temperature. The Big Kahuna borders on unwieldy. A topping of ham, Swiss cheese, cashew butter and pineapple--- tid-bits from a can, not the grilled fruit promised---are lost against the flavourless beef patty. The side salad is decent.

The pulled pork, coated in a bland gravy, is accompanied by an apple spiced mayo with the same cinnamon notes as apple pie. A chunk of rubbery fat seals the deal: I can't eat it. The French fries look suspiciously like McCain's skin-on . This isn't a surprise---our server shrugged off the "home cut" wording on the menu with a roll of her eyes and confessed they used frozen when we ordered.

Had our server checked in on us, or been at all visible, we might have noted our dissatisfaction. But she's not. When she finally does come, we try to salvage the meal with a slice of warm ginger cake. It arrives cold, and our server disappears again.

We actually circle the restaurant searching for her, even calling out "yoo-hoo!" toward a seemingly empty kitchen. We find her in the bar area, where she gives us a bill that overcharges us. When I note the error, she cites a forthcoming menu change that raises prices. I point out those aren't the prices on the menus we looked at. "Yeah," she says. In the end she deducts the cost. We laugh: This meal has felt like a long joke.

It's a totally different vibe the next week at dinner. The dining room is humming, and the servers seem cheerful and engaged, if still hilariously inappropriate at times. The prices have been raised.

We start with some Korean spiced wings ($10), plump and juicy, breaded and topped with a slightly tweaked red chili sauce. We also order beer. "This smells like pot," says our server of my Sleeman Cream Ale.

We order the Thai stack ($11) and the prime rib stack ($14.50). My friend upgrades his stack to include Baker Street chips ($3.75), thinly sliced potato coins dressed with tomatoes, green onion, bacon and cheese, served with a tasty peppercorn ranch dip. They're the highlight.

The prime rib stack is a tower of meat---"it's fuckin' huge" says our server---so huge the fries don't fit on the plate. The prime rib is tender, but again there are piles of fat in my sandwich. The Thai stack is an incredibly bland burger even with a pile of mango and chilis on it. It's quantity over quality.

Will I go back to Muster Station? Inconceivable.