DNA does not define us

Culture and community is what makes us Indigenous, not faulty genetic testing. 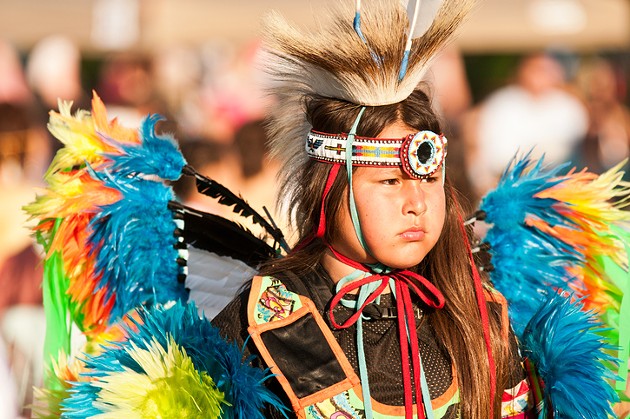 VIA iSTOCK
A young dancer participates in the Mawio’mi 2011 International Pow wow held on the Halifax Common.

I’m ambiguously brown. By that I mean I have brown skin and almond-shaped eyes. I get those from my dad who is Mi’kmaq. I also have curly hair, freckles and thin lips from my mom, whose grandparents came from Scotland.

“Where are you from?” is a very common question in my day-to-day as people try to sleuth out my ethnicity. In high school I once had someone tell me that everyone knew I was “not white” but weren’t quite sure what I was. When people find out I’m Mi’kmaq, the inevitable next part the conversation is the person telling me about their great-great-grandmother who was part native.

Hannah Grace
Rebecca Thomas is a Mi’kmaq activist and Halifax’s former poet laureate.
There has been an explosion of DNA testing that has led people to find tenuous Indigenous genetics in their family tree with the expectation First Nation communities will roll out the buckskin carpet for their arrival to their newfound identity. They use to undermine Indigenous struggles by turning fights for sovereignty, dignity, basic respect and empathy into indignation because Costco wouldn’t exempt the tax from their TV purchase.

What’s worse is individuals rate what identity is best with a sliding scale to Metis—a gross insult to the Metis who have fought long and hard to be recognized and now have to compete with new “metis” communities that have jumped on the DNA bandwagon. I have had individuals tell me they tried for a status card but were rejected so they got a card instead. What. The. Fuck.

Furthermore, what these genetic groupies don’t understand is that identity is earned and shaped by experience. Not by DNA. Whether a person is born and raised on the rez, a fluent language speaker, dealing with generational and residential school traumas, reconnecting after being a victim of the ’60s scoop, growing up in foster care with a white family, an urban aboriginal or thriving as an artist, activist or poet, they are all real Indigenous experiences that build upon a long history of being native in Canada. There is a story thousands of years old that connects us to this land. Our culture defines us and our communities claim us.

Recently, CBC published an article where a man sent in a cheek swab from his dog only to have the results come back saying that it was 20 Indigenous; 12 Abenaki and eight Mohawk. So the legitimacy of these tests should be just a questionable as Mikinak band cards.

If you can trace your family tree back to initial colonization of Turtle Island, of course, you will have an Indigenous ancestor. But that does not an Indian make. When early European explorers came to the shores of Mi’kma’ki, they didn’t bring women with them. The women they had access to for their “entertainment” were the women who were already here—a thought I shudder to think about.

I get it. We’re cool as shit. I can understand why you want to sit at our table. But if you’re going to eat with us, I better see you at the next language class at the Friendship Centre or holding a flippant sign at the next Alton Gas protest. I might get my eyes from my dad and my hair from my mom but I get my band number from an oppressive colonial and racist document called the Indian Act that seeks to arithmetically eliminate Status Indians and our ties and rights to our land. Genetics have nothing to do with it.

Over 500 people march in solidarity with Wet’suwet'en in Halifax