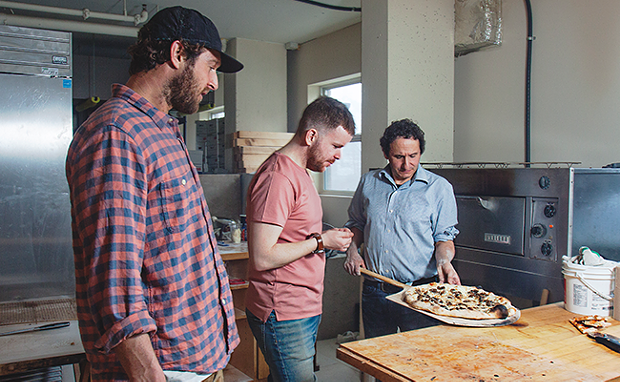 It's a little bit smoky in the prep kitchen at Yeah Yeahs. Josh Nordin and Dean Petty are testing out dough with their head dough maker, Sal Mosca. He stretches and tosses one of the half dozen dough balls he has with him and then tops it with a light tomato sauce, shredded cheese and paper thin pepperoni that crisps and curls at the edges as it cooks, cups filling with delicious oil. It's a great-looking pizza.

It's not Mosca's first time in this kitchen. He was the man behind Sal's Breakfast Pizza in the Ochterloney Street incarnation of The Canteen, the former tenant of the space above Two If By Sea that Yeah Yeahs is currently renovating. It's a different restaurant and a different pizza—Yeah Yeahs is doing New York-style—but one thing is still the same: His dough is amazing.

The whole team came together pretty organically. Petty, a partner at Anchored Coffee, has worked in the space for years. Nordin is a front-of-house pro, a familiar face to anybody who has eaten at Ace Burger or Field Guide over the years. Alexis Kelsall, another member of the TIBS and Anchored family, is also involved: Her recently launched ice cream company, Common Confections, is prepping ice cream sandwiches as the sweet finish to the simple menu.

"It makes sense since she's family," says Nordin. "We've been eating our weight in sandwiches. She makes this buttered popcorn ice cream that's just—" he looks to the heavens seemingly searching for descriptive aid, and then nods. "Yeah." He probably meant to add a second Yeah.

The main menu will feature whole pies and slices, with five core pizzas—a classic Margherita, a white pizza, pepperoni and a few others still in development—and one rotating special. "Not only to use seasonal stuff, but to use different products," says Nordin. "Then we can work with Ratinaud meat and Ciro's cheese, stuff we can't do constantly because we want to keep prices down." There will also be some salads, some add-ons like anchovies and olives, and local soda on tap.

The plan is to open in May, to be open for lunch and dinner, closing around 8pm with loose plans of maybe going until a little later, until just about sunset, in summer months. They want to keep the space fluid: It'll just be counter service, papers plates and pizza boxes, and shared seating with Two if By Sea, inviting people to feel at home both upstairs and down. One of the walls will be dedicated to paper-plate art.

"I just want it to be someplace that's just really comfortable where you can just go open a box and crush some pie," says Petty.

"I'm beyond excited," Petty says, grinning. "To be honest we dove into it. We just jumped, didn't check the depth of the pool, just full splash. But the space is coming together. The pizza is tasting unreal. I'm stoked." a