Canadians need diverse political leaders, on all sides of the Legislature, to enable governments to use better research to inform public policy. 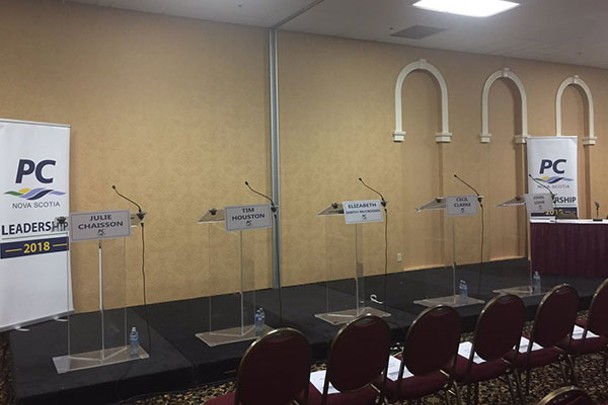 VIA FACEBOOK
Empty podiums at the last Tory leadership debate earlier this month. Jennifer Searle is a PhD student and registered nurse who practices within the mental healthcare system and Dalhousie School of Nursing as a clinical educator.

Gender bias is real. Health research highlights the risks associated with gender bias and the benefits of incorporating diversity to gain a broader, more informed approach to making decisions about public health. Health research has also revealed the limitations of using men to reflect the needs of the public, which supports a larger conversation about diversity. Canada has been recognized across the globe for our diversity, but this image is wavering.

Andrew Scheer normalizes exclusion by siding with racists to criticize our prime minister. Doug Ford doesn’t heed the assertion of Nobel Prize-winning economists that a climate crisis could be avoided through developing economic policies around carbon taxation. These straight, white, gender-normative men serve as a cautionary tale that the Canadian electorate can (and should) learn from.

Leveraging my lesbian perspective to challenge the status quo has most recently involved joining the PC Party of NS. It’s important to share the strategy behind the most political decision I’ve ever made. It’s a significant departure from the Liberal I’ve always been. My lesbian identity is comprised of being woman-identified within LGBTQ2S communities. Of the five candidates in the PC Party of NS leadership race, two are women and one is a gay man. Every candidate is white and gender normative, but change comes with small victories, so this is an important shift to support.

Governments use research to inform policy change, but I’m concerned about the capacity of our current politicians to do this effectively. Scheer and Ford haven’t demonstrated this capacity. With this in mind, I wonder if a lack of diversity in politics hinders informing political decision-making with research. Canadians need diverse political leaders, on all sides of the Legislature, to enable governments to better use research to inform policy. Businesses that are successful with diversity and inclusion initiatives are shown to perform better, which makes this an area where governments can learn from the private sector.

For the first time in the history of the PC Party, there is a chance that a straight white man might not win the leadership race—but it won’t be a woman. Polls put the female candidates behind all three male candidates. Cecil Clarke is the gay, white man who received threats that he would be “shamed” out of the closet if he ran in the leadership race. The polls put him in second place.

Depending on the outcome of this weekend’s vote, the status quo could be upheld and governments will continue to lack diverse representation by propagating a myth that diversity causes dissent.

Civic engagement is incredibly important (and something in which I am privileged to be involved), and for a party who hasn’t had a win in almost 20 years in our so-called “have-not” province, it might be time to look at what the research tells us. We need to do something if we want a better outcome, and members of the party need to send a message of zero tolerance for hate.