General Rick Hillier avoids questions of his personal responsibility for the alleged torture of prisoners. 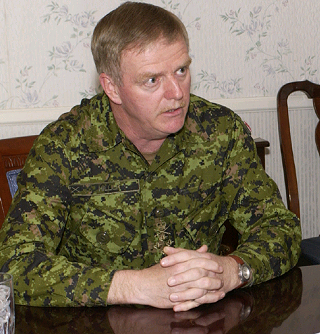 Rick Hillier, former chief of the Canadian defence staff, dodged questions in Halifax on Saturday about the torture of prisoners handed over by the Canadian military to the Afghan intelligence service. Hillier was asked by The Coast why the Canadian forces followed a cumbersome six-step method of informing the International Red Cross each time a detainee was transferred to the custody of the Afghans.

Canadian diplomat Richard Colvin told a Parliamentary committee last week that the six-step process took "days, weeks or, in some cases, up to two months," during which time nobody monitored what happened to the prisoners. He added that Canadian authorities also kept poor records making it almost impossible to trace transferred prisoners. According to Colvin, the Canadian military handed over six times more detainees than the British, and all of them were likely tortured while in Afghan custody.

Asked why the Canadian military made monitoring what happened to prisoners so difficult, Hillier, who originally signed the prisoner transfer agreement in December 2005, replied that the issue of monitoring prisoners was resolved over time.

"The agreement was changed to allow Canadians to have access to all the detainees as is necessary, so over a period of time, it was resolved," Hillier said refusing to answer further questions.

The retired general did not explain why it took more than a year to change the agreement. Under international law, it’s a war crime to hand prisoners over if they’re likely to be tortured.

Colvin testified that many of the Afghan men Canada rounded up were "just local people, farmers, truck drivers, tailors, peasants, random human beings in the wrong place at the wrong time, young men in their fields and villages, who were completely innocent but were nevertheless rounded up. In other words, we retained and handed over for severe torture a lot of innocent people."

Hillier himself stirred up controversy in 2005 when he declared that Canadian forces would be ruthless in going after terrorists in Afghanistan. "These are detestable murderers and scumbags, I'll tell you that right up front. They detest our freedoms, they detest our society, they detest our liberties," he said.

Because he refused to answer any further questions, Hillier could not be asked whether, as chief of the defence staff, his statements had encouraged Canadian soldiers to engage in the indiscriminate rounding up of Afghan men. He won’t be able to dodge questions so easily when, as expected, he’s summoned to testify before the Parliamentary committee looking into the torture allegations.

Hillier was in Halifax to participate in a panel discussion on the war in Afghanistan at the Halifax International Security Forum, a gathering of more than 300 politicians, military leaders, business executives, journalists and academics. He told the forum that victory in Afghanistan is possible if US President Obama sends in thousands more troops to establish security. He added it’s essential that western governments invest in development and reconstruction projects that will help Afghan President Karzai build a stronger central government free of corruption. "We’ve got one shot to do it," Hillier declared. "We have 12 to 18 months to turn things around."

Hillier suggested Canadians are growing increasingly disenchanted with the war in Afghanistan because the media focus on bad news.

"Canadians know three things," he said---young soldiers are dying, insurgents are using deadly roadside bombs and the Afghan government is corrupt. "All three are negative," Hillier said. US Senator John McCain, who lost the presidential race to Barack Obama, expressed confidence that American public opinion will swing decisively in favour of the war after the US sends thousands of more troops. McCain predicted Obama’s speech-making skills will persuade Americans the war can be won with time, steadfastness and patience.

However, Pakistani journalist Najam Sethi predicted that nothing much will change in the next 12 to 18 months. He added the Pakistani military establishment believes that "America is losing."