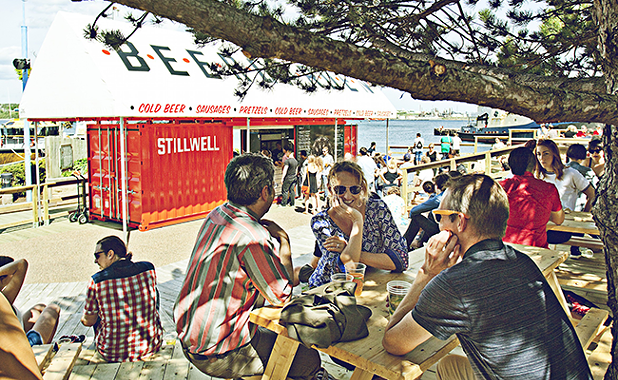 THE COAST
There is no more Stillwell beer garden on the waterfront. We finally know why this month.
The meeting minutes of Develop Nova Scotia a pretty prosaic affair.

Participants discuss their contract with Grant Thorton for auditing services; preparations for the move to a new office location; the ‘lots of progress’ being made with the Queen’s Marque development. In short, they resemble the kinds of meeting minutes you could expect to find posted on any government website—except you wouldn’t. In order to see these minutes, The Coast had to file an access to information request.

That might not sound like a big deal. But according to Michael Karanicolas of the Right to Know Coalition of Nova Scotia (and occasional Coast columnist), the fact that an everyday document like these minutes not available by default “is emblematic of a broader trend and a resistance to transparency.”

Even as many kinds of information become more available and accessible, it continues to be hard for Nova Scotians to get information about their government.

And this week, Nova Scotia’s auditor general and privacy commissioner both released reports critiquing the province’s implementation of its FOIOP portal and handling of last- year’s breach.

In her report, privacy commissioner Catherine Tully wrote that the Department of Internal Services “lacks a comprehensive, methodical plan to prevent a similar occurrence in the future.”

Yet the problems with access to information and transparency also persist in more understated ways—like the requirement of filing a FOIPOP for an innocuous set of meeting minutes.

“It’s not even a question of resources and efficiency,” says Karanicolas. “Because it’s probably less work for [Develop Nova Scotia] to have a spot on the website, and put the minutes out there whenever they’re finished than to respond to even freedom of information request.”

But if proactively disclosing information saves money, why don’t we see more of it?

Karanicolas says there are practical reasons–governments are wary of the possibility of being taken to task for real or perceived wrongdoing, plus there’s inertia when it comes to adopting new practices for sharing information.

“With the move into greater digital disclosures...some institutions have more readily than others,” he says. “Governments can be slow to change.”

Together, this drives a “culture of secrecy” Karanicolas says, “where public institutions distrust transparency and distrust oversight.”

As for Develop Nova Scotia, communications director Deborah Page says in an email that the corporation has to balance an objective to be “as transparent as possible”, with the private sector’s desire for confidentiality.

Page also writes that, as a new corporation with an expanded mandate (it used to be the Waterfront Development Corporation), they’re reviewing all procedures and practices, including those on disclosure and accountability, and “may be open to adopting new policies and procedures in the future and would work with the provincial FOIPOP office in that process.”

But at least in the past, there have been other examples of Develop Nova Scotia showing a reluctance to disclose—recently, the CBC reported that the corporation would not release the names of companies that had bid for the waterfront beer garden until bids had been evaluated.

This follows a report released last year, in which privacy commissioner Catherine Tully outlined how the corporation had not been justified in withholding information about the previous tendering process (that information was eventually made public).

And Nova Scotia isn’t the only place where you see information being withheld until it’s asked for—and sometimes even when it is.

“This is actually very common across governments, where there’s a distrust about putting information out there,” says Karanicolas.

“This is actually very common across governments, where there’s a distrust about putting information out there,” says Karanicolas.

When it comes to Develop Nova Scotia’s minutes, the stakes might not be readily apparent—for the most part, many people would be no worse for wear for not knowing about the internal deliberations of a public body.

“That is the system of accountability that is fundamental to a democracy,” says Karanicolas.

After all, as anyone can tell you who’s ever slacked off, idly scrolling through Instagram or browsing Amazon, while their supervisor or professor is looking away, it can help to know that someone is watching.

“Accountability isn’t always pleasant, but it is necessary. And you know, it makes you better at your job.”