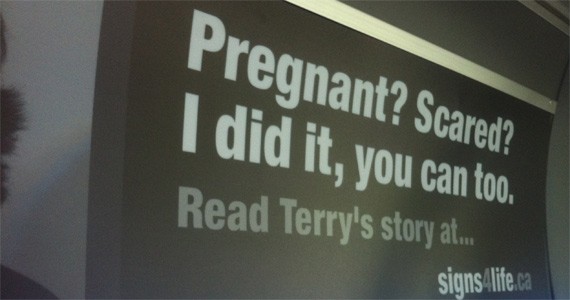 JACOB BOON
There are 255 transit ads running for Signs4Life and the Open Door Women’s Care Centre.

A "faith-based" organization with opinions about your pregnancy has taken out ads on Halifax Transit buses, and that's not sitting well with Allison Sparling.

No, the news isn't on repeat. Yes, this all happened back in January when anti-abortion group Signs4Life took out bus ads, prompting Sparling, South House and others to band together and raise funds for their own pro-choice ads. But now Signs4Life are back, as are new ads for the Open Door Women's Care Centre. The latter, Sparling says, is more alarming than the former. "I have a problem with those, but I understand that at their root they're very open about what their motivations are," Sparling says of Signs4Life. "This is, I feel, a very, very different situation."

Open Door is one of hundreds of pregnancy "care centres" in Canada that use innocent names and obfuscation to cloak the anti-abortion tactics they deploy on the unsuspecting women who walk through their doors. Open Door works as a member of the Canadian Association of Pregnancy Support Services, an umbrella group that believes "All humankind has intrinsic value and significance from conception to natural death."

According to the Abortion Rights Coalition of Canada, members of CAPSS must adhere to several rules of conduct, including defining their centre as an "outreach ministry of Jesus Christ" and a Code of Counseling Ethics which says counsellors must not "provide, recommend or refer clients for abortion."

Which is not the attitude you'd ideally want when seeking impartial medical advice. "We are here to help women make informed decisions about their reproductive options," Open Door's executive director Heather Harman writes in an email, calling it a "non-political, faith-based, non-profit organization."

Tiffany Chase, speaking for the city, stresses that Halifax Transit's advertising policy is easily found in all riders' guides, as well as online. That policy takes great pains, citing a 2009 Supreme Court decision on freedom of speech, to describe how though an ad might be offensive that doesn't mean it can be taken down. Chase also emphasizes that third-party contractor Pattison Outdoor is ultimately in charge of what ads go on municipal transit.

"Pattison obviously is a large company that places ads all across Canada," she says. "They're very familiar with the standards."

That would be the Canadian Code of Advertising Standards, which states anyone posting an advocacy advertisement must be clearly identified.

"Both of those ads do contain a way for you to find out more information about the organization that has posted the ad," Chase says.

But what do you find out when Googling these organizations? Open Door's site remains vague about its "faith-based" offerings, especially what's entailed in "pregnancy options counseling."

Advocacy ads under national standards must identify their organizations, but the code also says advertisements must not contain "inaccurate, deceptive or otherwise misleading claims" in regards to services offered. They also must "not omit relevant information in a manner that, in the result, is deceptive."

Targeting a very specific audience (that's largely made up of lower-income adults and students or minors) without letting them know your pregnancy centre is opposed to abortion sure seems deceptive.

Sparling is taking a different approach, or, a similar approach to what worked before. She's hoping public outcry will help counter the ads, and has launched a petition (viewable here) which she hopes will clarify the rules for displaying misleading medical information in transit advertisements.

"It's a way to gather awareness that these things are on the bus," she says. "I'm not convinced that if we got enough public pressure we couldn't get change in our own way."