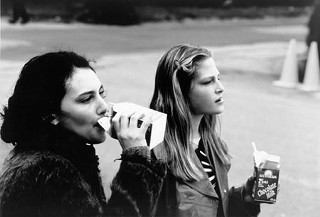 No one in Hollywood would finance Bowling for Columbine, Michael Moore's searing look into gun violence in America, so this Halifax company, which closed in 2003, stepped up---and got an Oscar for its gamble.

Eisener has been making genre shorts with his band of Dartmouth renegades since his teens---which weren't that long ago---and caught the attention of Robert Rodriguez and Quentin Tarantino with his grindhouse tour de force Hobo with a Shotgun, which snagged Eisener and his creative partners, Rob Cotterill and John Davies, first prize in an international contest. They followed it up with Treevenge, which got an honourable mention at Sundance in 2009. A Shotgun feature---with rumours of Nick Nolte as The Hobo floating around town---is headed to camera this spring.

Her New Waterford Girl is one of the best coming-of-age stories ever to come out of this country. Set and shot in rural Cape Breton, it boasts teenaged Liane Balaban and Tara Spencer-Nairn in a pair of benchmarks, plus comic blasts from Mary Walsh, Nicolas Campbell and Halifax's Stacy Smith, who earned a Genie nomination. Fish's script is a lovely, melancholy look at maturity that feels real and lived-in both in its youthful dialogue and via director Allan Moyle's shots of dingy legions and desolate shoreline.

Page's formative years in Canadian film and television are largely ignored and/or dismissed by the America who discovered her in Juno, but the actor's 15 northwise credits leading up to her breakthrough performance are no joke, especially her turn as Molly Parker's secret daughter in Wiebke von Carolsfeld's finely wrought film version of Daniel MacIvor's play Marion Bridge. Not to mention that after stints in Toronto and New York, the actor chooses to park herself in the north end between jobs, proving that even Academy Award nominees don't have to leave town to follow their dreams.

The writer-actor, who had his start in local community theatre, found himself shooting his first and second features in Halifax and Windsor back-to-back in 2006. Poor Boy's Game, a dark boxing drama directed by Clement Virgo and inspired by Thorne's youth and his own time in the ring, marked the arrival of a new filmmaking voice in Canada. Thorne attended TIFF 2007 with both Poor Boy's and his directorial debut, the black comedy Just Buried, starring Jay Baruchel and Rose Byrne. "From here on in, if you want a script by me, then it's directed by me," he told us.