“The city sacrifices a lot when it tries to become something it’s not.” 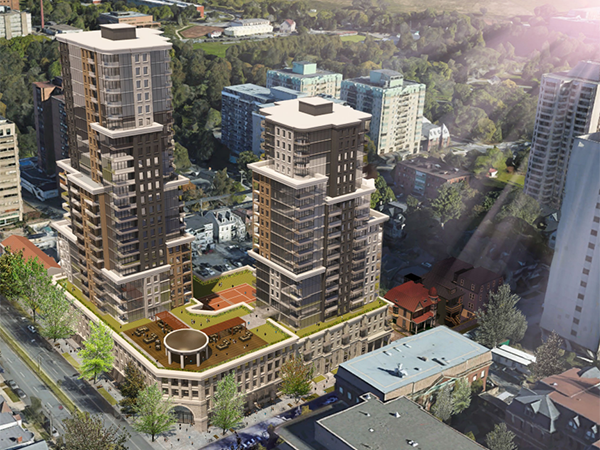 Two big side-by-side developments got approval from council in July for the corner of Robie Street and Spring Garden Road.

Halifax Regional Council has recently approved a slew of developments within the downtown, south end and Quinpool areas of the city. All the developments are either high rises or exceed previously stated limitations on height in the city. The 8-storey development on Wellington Street exceeds the 6-story height limit despite the local outcry. The most controversial development is four high rise towers for the corner of Robie Street and Spring Garden road.

City council had a public hearing and a vote on the four high-rise towers, all proposed to be around 27 stories in height. The vote passed unanimously. The results from this vote bring up a question of what Halifax's goals are concerning development. The towers are being built over what many consider heritage buildings—some of which will be restored or upgraded as part of the proposal. Many were built during the Victorian era and significantly add to Halifax's character. On the block that is being developed, 44 of the houses are listed as heritage sites, and 11 others qualify. Is Halifax sacrificing its character in a futile attempt to rapidly develop? I would argue yes.

Spring Garden Road has always been subject to growth, but this approach feels lazy.

People love Halifax because of its unique character. We don't need to look like Toronto.

The city sacrifices a lot when it tries to become something it's not. Halifax is known for its old, wooden houses and their lovely colours. It's quaint, but that's the point. Halifax historically has always been a small, quaint city. We should try to preserve that character.

SUBMITTED
Angela Capobianco is a graduate student and Haligonian.

For a city that wants to rival Toronto, Montreal, or Vancouver, some rundown buildings and small, Victorian houses stand in the way. Haligonians have a desire to feel good enough. We want to shed that inferiority complex that hangs over not only Halifax but much of the Atlantic Provinces (the rest of Canada's opinion of the east coast does not aid in this either).

For many councillors and residents, Halifax will be able to stack up alongside the country's bigger cities if we acquire the massive high-rises and spread our urban houses outwards. We've always been a have-not kind of province, and historically Halifax has always been looked upon as sort of rough and tumble.

This isn't meant to be a finger-waving, reactionary sermon. Development is not inherently bad. Lazy and uncreative development is, though. People have connections to these buildings—new and old—and they shouldn't just be swept to the side and dismissed. It changes how people interact with the city.

On a more practical level, there will be increased traffic from the four towers that are being planned at Robie and Spring Garden. We must look at the impact of the development of the Nova Centre on the businesses on Argyle Street to gauge how this could negatively impact the area.

We don't need to look like Toronto in our attempt to reach the same level as Toronto. Creative and imaginative planning can take Halifax a long way. We just need to shed our insecurities and embrace our quaint and rough histories in the process.