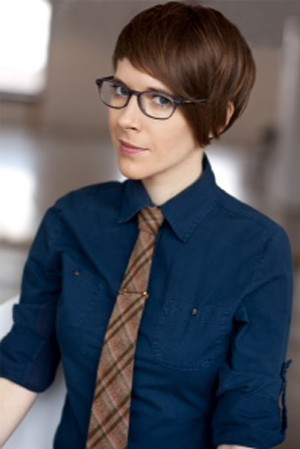 If you ever heard "Nerdy Love Song," "No Worries" and the more recent "Consensual as Fuck," you know DeAnne Smith can kill it on the vocal front. If you've seen her performances at Just for Laughs, Melbourne Comedy Gala, Edinburgh Fringe Festival, you know she can slay on stage talking about everything from looking like Justin Bieber to getting waxed for the first time.

You might have heard her online with her podcast, Questionable At Best, in which she interviews people on more hardcore issues, the newest one being on third-culture identity with Lama Hamad.

If you haven't seen her in at least one of these forms, you are missing out on a comedian critics have called "nerdy yet dirty," which leads to a lot of funny.

Smith started as a poet but realized she wanted to make people laugh. With poetry "it's hard to tell whether they're feeling reflective or suicidal. With comedy you always know what's happening."

A lot has changed since then, mostly her presence on stage. "When you're just starting, going to open mics can be scary or can make you nervous, you feel like you have a lot at stake," she says. "But, recently I was in Winnipeg taping something for the CBC, it was a TV gig and I realized 'Oh I actually feel pretty relaxed about this, I feel like this will be fine.'"

Born in the States and living in Mexico before calling Toronto home, Smith says this has only helped her comedy transition from country to country. "I think it works for me because I'm a bit of an outsider perspective on Canada and being here when I travel the rest of the world. I've lived in Canada long enough that it resonates with me---that I bring a certain chance of Canadianess to my comedy when I'm in other parts of the world." Speaking of The Seahorse Tavern , Comedy