Day 6 at the Fringe 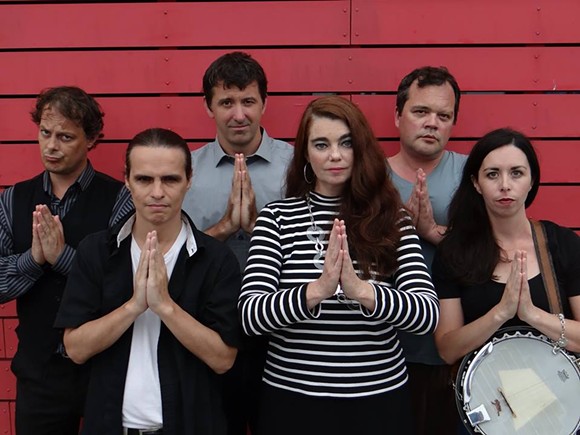 Photo: Philip Aulenbach
The angelic cast of Go to Hell

Down for the Count by James Boyer

In his short play Down for the Count , he manages to celebrate both the power and confidence that can be gained with age while also recognizing the vulnerability that comes with realizing there are fewer days ahead than behind.

The story is a snapshot of a group of women who have just lost the friend who was at the centre of their friendship. As they gather together over a bottle of gin, they rehash the past and talk about the future.

Because the play is set in the hours after the funeral when reminiscences are inevitable, the dialogue that fills the audience in on the back-story is believable. There are some very funny lines and some acute observations. (Although some of the dialogue, particularly a speech about local food, comes off as more of an information piece than natural conversation.)

Actors Carolyn Boyer, Elaine Casey and Helen Goodwin, all veterans of community theatre, work well together and are believable as life-long friends.

This is not ground-breaking theatre, but it is a nice little exploration of the challenges of getting older.

L: A Fragmentation Subway Waltz is a disorienting ride into a young girl's fragmented psyche.

Lesley Smith stars in this one-woman show about a university student referred to as "L" who has grown up in a family split between two cultures, two languages and two faiths. Her father's death is the crisis that fractures L's identity.

Smith gives a strong performance, transforming from a French-speaking professor, to a timid lost soul, to an in-your-face youth on the verge of violence.

The non-linear structure of the story-telling is an apt fit for its subject matter, and is very effective in conveying a sense of disorientation to the audience.

And though there appears to be several logical inconsistencies at the beginning, they are resolved when L's full, sad story is revealed in the end.

Go To Hell by Michael Best

When you go to sleep with numerous plays jostling for room in you brain, it's interesting to see what you wake up thinking about.

This morning, my first thought as I opened my eyes was, "I really liked that Matthew Lumley death-on-a-bull-riding- machine scene".

Michael Best's irreverent comedy Go To Hell skewers stereotypes left right and centre, so it only makes sense that the play's central gay character Johnson (Lumley) would die in a country and western bar after a dance number with "Baby Cowboy".

The only way that Johnson, who's sent to hell for the crime of being gay, can escape an eternity of torture is to return to earth and turn five straight men gay.

Best has assembled a cast of strong actors, but the one who stood out most for me in this talented bunch is Tara Doyle. She brought unexpected depth to the role of the over-sexed preacher's daughter.

The humour is bawdy and broad and oh-so politically incorrect (as if you couldn't tell from the synopsis) but this is a play that works on several levels, ultimately delivering some interesting ideas about redemption in a very, very funny way.