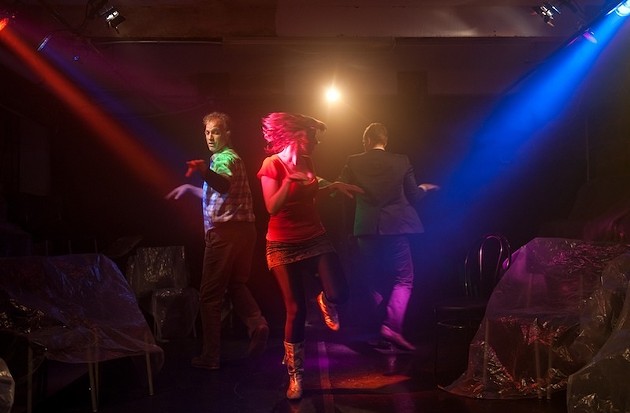 Zuppa Theatre meets Plato at Lion and Bright
Thanks (or no thanks) to a broken axle, I had to miss out on 2b Theatre's When It Rains on Sunday night, but I did see it, and loved it, when it premiered here in 2011. I can't fit it in now, but with shows tonight and tomorrow, you can. The festival buzz on it is fabulous.

The industry portion of Magnetic North is an excellent way for theatre practitioners to pool knowledge and make valuable contacts. For instance, yesterday I took in an industry talk on the nitty-gritty of touring theatre. There was a wealth of knowledge shared by a panel of international presenters who offered some useful "inside information".

The industry feasts are another way to meet and mingle in a more informal atmosphere. The meals showcase some of Halifax's great dining spots (last night's was The Carleton). I shared supper and spirited conversation with theatre presenters from Ottawa, New York and Reykjavik who were attending Magnetic North on the look-out for shows to bring home to their own festivals.

There's a lot going in Pop-Up Love Party. It's a kind of raucous meditation (yes, there is such a thing) on love that's exuberantly presented in the tight quarters of a busy restaurant. It uses song and movement in a captivating way and walks a lovely line between formality and silliness.

The show is shaped around six speeches re-imagined from those in Plato’s Symposium. Zuppa brings their trademark physicality to this speech-ifying, performing aerobics, wrestling, dancing, hopping on tables to illustrate various points.

The  speeches themselves aren't always captivating. Some are too long, others are too unfocused. The most successful illuminate with personal stories.

That being said, it is a work in progress. The finished product will be premiered in spring of 2015 and served up with an innovative menu from Chef Daniel Burns.

Yesterday, I tried to get in to see one of these five-minute plays staged in the elevator at the Maritime Centre (Fortis Properties), but left it too late. Apparently there were people lined up from opening to close to get in on this innovative theatre experience.