The Nova Scotian folk mainstay adds his voice to the chorus opposing the Cochrane Hill gold mine with new single. 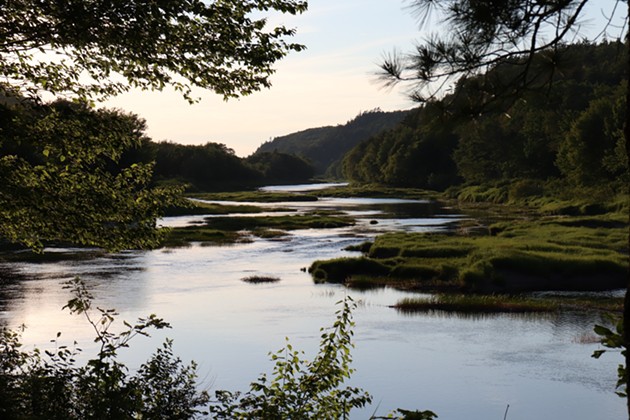 Submitted
The Saint Mary's River sits along two formally protected nature conservations. Atlantic Gold wants to put a highway through both of them.

A bird’s-eye view of a great river. A guitar strums. We see a man playing and singing next to the river: Dave Gunning. “It’s still up there in the hills, where the scars haven’t healed,” Gunning sings. He is sitting next to Cochrane Hill, where Atlantic Gold has proposed an open-pit gold mine.

Gunning’s song “For All The Gold” (co-written with Jamie Robinson) sounds like classic Nova Scotia folk fare until you listen to the words. If you find it difficult to catch, they’re posted on a new website created by the Saint Mary’s River Association—complete with clickable lyrics to see the facts. The song is a new soundtrack for the Association's NOPE (No Open Pit Excavation) campaign, aimed at raising awareness of, and preventing, the potential large-scale destruction the proposed mine could cause. Cochrane Hill is one proposed mine among four Atlantic Gold wants to dig. One in Moose River is already in operation. The Coast reported on the Cochrane Hill controversy when it began in August 2019.

“We sat down and said, ‘we have to get people with facts and science, but you also have to grab people in their hearts,” says Scott Beaver, president of the Saint Mary’s River Association, speaking by phone. The idea for a more graphic, artistic callout of the proposed mine came from association meetings after much-publicized images of salmon spawning in the river attracted a lot of awareness last winter. Some of those images are included in the video.

The association’s attention to facts was something that drew Gunning into the collaboration. “It’s almost like we’re living in the era of disinformation,” he says by phone. “And what I admire about Scott’s group is the heavy lifting that they’ve been doing to get the facts out to the public. It’s not an easy thing to do.”

Gunning sees similarities to the Boat Harbour pulp mill protests he previously participated in: “It took an evening basically, just reading through the documents, and I just couldn’t believe the similarities to the pulp and paper issue,” the folk singer says. He sees the approximately 120 truckloads of trees processed by the pulp mill as comparable to the 27 tonnes of Cochrane Hill earth that will be dug up and pulverized to extract each ounce of gold. The mine has projected a yield of 319,000 troy ounces from Cochrane Hill—which means tilling 10, 660, 000 tonnes of terrain. To say it creates an immense amount of waste to process for a small amount of usable product is an understatement. Atlantic Gold provided this statement to The Coast: “St Barbara Ltd [parent company to Atlantic Gold] respects the efforts of the St Mary’s River Association and other groups in Nova Scotia dedicated to preserving the health of the St. Mary’s River. Respecting the environment and ensuring stronger communities are two of our five corporate commitments. We believe in the principles of co-existence and are committed to both preserving the health of the St. Mary’s River and providing economic opportunity and development in rural Nova Scotia. We look forward to providing relevant scientific studies as part of the proposed Cochrane Hill Gold Mine’s Environmental Impact Assessment process.”

Amid the pandemic, Beaver says, there are plenty of reasons to drop the issue and forget about it. “Our lives are almost spinning out of control” he adds. His wife, a full-time nurse who is also taking university courses online, is working and burning out. He is driving an hour to work every day. They have a family to take care of. “But,” he says, “My children do not want the mine here, no matter what.” And he knows Atlantic Gold is carrying on. The gold mines qualify as essential business. They haven’t stopped working.

According to Business Insider, “gold is regarded as a secure investment and is very popular as a means of coverage in times of crisis.” Its value tends to rise if there is upheaval and chaos in the world. Gold hit an all-time high of $2,035 per ounce in August. November was the worst month in four years for gold value, its price declining to $1781 per ounce after the U.S. election and with news of a Coronavirus vaccine on the way. Now that the U.S. Congress has begun negotiating economic recovery, however, gold prices are rallying again. About half of the world’s mined gold is used in the jewelry industry.

While the proposed Cochrane Hill mine may create jobs, Gunning and the Saint Mary’s River Association are determined to preserve what they see is a greater treasure: “My thinking is, they’ve already got a gold mine down there,” he says. “Look at how beautiful that river is.”