Montreal artist performs with his Coloured Plates in the Sculpture Court. 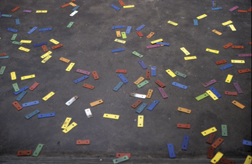 After a wildly successful and steamy time at SeaDogs last night, the Sound Bytes Festival fun continues this evening at the Dalhousie Art Centre.

Montreal-based artist Daniel Olson, one of the artists in the Dal Art Gallery exhibition Resounding, is performing "Coloured Plates." Olson has collected toy xylophones over the past 15 or so years, and in this performance he throws the coloured plates from those instruments onto the floor, one by one. I've watched the video and it's mesmerizing. No two performances will ever be the same. Show starts at 6pm in the Sculpture Court.

If you're into the sounds that instruments make before they're destroyed or up in the air, be sure to check out Piano Factory at Anna Leonowens Gallery, which at one time was a piano showroom. The exhibition includes Gordon Monahan's Piano Airlift. The piece documents a project Monahan collaborated on with Thaddeus Holownia. In 1988 they went to the Sound Symposium in St. John’s, Newfoundland, where a Long Aeolian Piano they made was airlifted by helicopter to the top of Gibbet's Hill, where it sat and made sound for two weeks. Afterwards, they threw the piano over the cliff to its death. In Anna Leonowens, there is a midi-player piano which plays an accompaniment to the video of the piano being lifted.