The Maritime Link is sold as a solution to our environmental problems. So why is no one talking about its negative environmental effects? 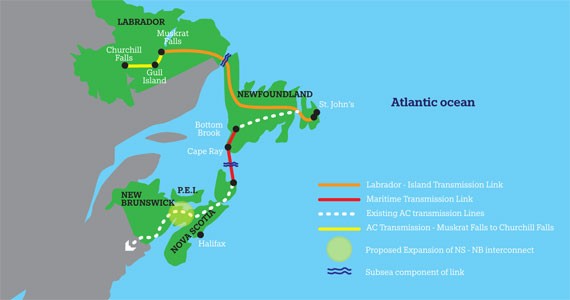 In reality, the project's net environmental impact is enormously complicated.

On the positive side, Nova Scotia and Newfoundland-Labrador would see huge reductions in greenhouse gas emissions. The Muskrat Falls project could shut down NL's last remaining oil-burning generating facility. It's a major part of NS's planned 40 percent renewable energy by 2020. If used properly, the project could increase wind energy for both provinces, providing storage capacity, a key challenge with wind.

On the negative side, "as the federal environmental assessment says repeatedly there are long-term irreversible adverse effects on the Lower Churchill watershed," where a 41-square kilometre reservoir will be created, says Catherine Abreu, coordinator of the Atlantic Canada Sustainable Energy Coalition.

Of great concern are social impacts on the Nunatsiavut and NunatuKavut Inuit and the Nitassinan First Nations communities, their permanent loss of a river of historical and cultural significance. The EA report worries of "displacement of sources of food [and] cumulative threats to their traditional way of life." The dam will increase mercury levels in the river's 13 fish species for three decades.

On April 5, members of the NunatuKavut community blocked the Trans-Labrador Highway after being shut out of the negotiating process. In a recent statement Todd Russell, president of the Community Council, says he's "tried again and again to work with and negotiate with the provincial government, who have refused such offers."

He says his community is "last for jobs [with a history of] contracts...going to those from away, of others taking housing when we need it most, of no benefits going to our communities." The council wants NL to engage in talks on development of traditional territories, as required under Canadian law.

The project puts environmentalists in the tricky position of either supporting it despite its irreversible impacts, or opposing Nova Scotia's ambitious renewable energy goals. "No one is confident the world can reach 100 percent renewables without damming more rivers," Abreu says.

Abreu feels the project can have a net benefit, but there are unanswered questions. "When would coal be shut down? How much wind capacity would there be? There should be a vision for a fossil-free fuel mix by 2040."

Newfoundland has been even less forthcoming, putting energy efficiency and the best wind potential in Canada on hold until Muskrat Falls is in place.

If a net benefit is possible it requires juggling interwoven complexities of climate science, upgrading the grid, variable energy sources, and infrastructure covering thousands of kilometres, multiple provinces and several indigenous communities. It's hard to put faith in provincial governments so gung-ho on a mega-project when they haven't meaningfully consulted the effected indigenous communities.