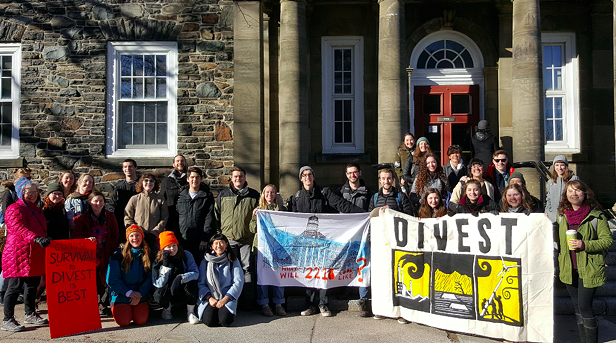 VIA DIVEST DAL
Activists celebrate last winter after the Dalhousie board of governors votes to look into divestment.

The financial specifics, previously undisclosed in Dal’s more generalized annual funding reports, were contained in a Freedom of Information request submitted by The Coast in 2015 that was finally awarded this summer.

The list of research grants given over a three-year period offers an idea of what money the university receives, from whom and for which research projects.

For energy companies, the most prominent funder was Exxon Mobil, who invested more than $1.7 million for two geoscience research projects in 2013 and 2014. BP, Suncor Energy, Husky Energy and Repsol Energy each gifted Dal just over $63,000 in 2015 for a project investigating potential source rock—an essential component in petroleum systems—in the Maritimes. The university also received just shy of $28,000 from Imperial Oil for two research projects—the larger sum for carbon research and a smaller amount for road safety awareness.

All of these corporations appear on the Carbon Underground 200 list of top global carbon emitters. Exxon, in particular, has the fourth largest carbon emissions of any oil and gas company worldwide.

The relationship between Dalhousie University and big oil has come under criticism in recent years as the school’s divestment group, Divest Dal, has campaigned for the administration to pull out of financial dealings with many of those same carbon polluters.

For a number of years, Dalhousie has declined to divest from major fossil fuel companies, citing fiduciary duty and potential investment risks, as well as recent sustainability initiatives as reasons why divestment is impractical for the university.

“I think Dal, so far, hasn’t been investing in a way that’s consistent with its moral principles and its sustainable principles,” says Kathleen Olds, a Divest Dal member and a student representative on Dalhousie’s board of governors.

“What Divest Dal is working on is finding a way to divest that works with the administration's goals of not alienating investors, and is within the investment committee’s mandate of making on investment, and also recognizes the existential threat of climate change.”

The university’s last official statement on divestment came in 2014, following a report from Dalhousie’s investment committee.

“The Board believes it will have more influence with regard to climate change as an engaged investor than it would through a one-time decision to divest holdings in carbon companies,” board chair Lawrence Stordy says in the statement. “We also believe it is consistent with the mission of the University to work with all companies which support research that addresses the key issues of climate change—even if they hold significant carbon assets.”

Since then, Divest Dal and the university have been in a slow tug of war to protect the financial interests of the school, while also demonstrating a commitment to reducing carbon and greenhouse gas emissions.

Olds, who also sits as an observer on the university’s investment committee, thinks Dalhousie’s continued research partnerships with major carbon companies can be interpreted in a couple different ways.

“One of them is a potential risk of fear motivating our investment decisions, so the fear of alienating these investors, of losing this money, of losing these opportunities for students,” she says. “Another way could be that Dal tries to use these companies as money and try to work with energy companies to make a fossil-free future.”

The 2014 board of governors’ statement says that Dalhousie’s approach to addressing climate change in its investment policy will be to “investigate ways to allow new Dalhousie benefactors to channel their donations to environmentally sustainable fund options,” as per the recommendation of the investment committee.

From 2009 to 2014, the report states Dalhousie invested more than $45 million in 39 sustainability initiatives designed to reduce the university’s carbon footprint.

The university also has a small chunk of research funders in the renewable energy sector—from 2013 to 2015 the university received over $400,000 in research funding from corporations like the Offshore Energy Research Association of Nova Scotia, Next Energy Technologies Inc., Clean Nova Scotia and more for research projects surrounding renewable and clean energy sources.

Olds is hopeful that a revised approach to Dalhousie’s investments and commitment to sustainability can bring about the change that the divestment campaign is hoping for. Completely cutting off carbon-emitting corporations, she says, might not be the way forward.

“If we absolutely refuse to have any kind of dialogue with them, I don’t know if that’s as productive as engaging with them and pushing them to be better,” says Olds. “I am fundamentally hopeful that there is a way to move forward that will work well for everyone.”

A motion passed at last February’s Board of Governors meeting asked the school’s investment committee to continue seeking out fossil-free investment funds. The committee’s final report on that plan’s fiscal viability is expected March of next year.