Board of governors approves motion, spurred on by student activists against climate change. 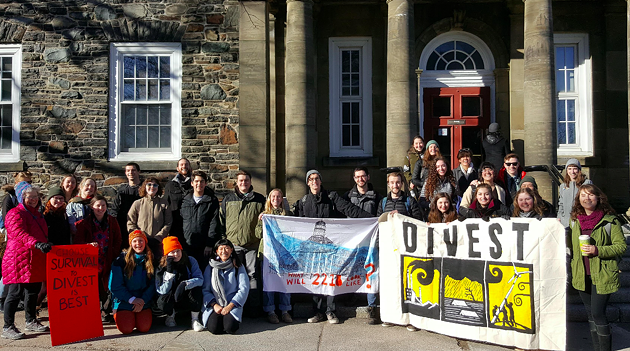 VIA DIVEST DAL
Activists celebrate this past Tuesday after the board of governors votes to look into divestment.

The province’s biggest university will look at divesting its financial portfolio from fossil fuel companies.

The Halifax school’s board of governors approved the motion Tuesday to investigate a new ecological option for its investment portfolio.

A third-party financial consultant will be hired to figure out a financial strategy free from climate-changing fossil fuels is viable.

It’s a big win for student activists in Divest Dal, who’ve been calling on the school to divest its endowment fund for the past five years.

“This fund search is the crucial first step towards changing our investment strategy and aligning it with our institutional values,” says Divest Dal member Alex Ayton in a press release. “Students have worked hard on this motion and we’re glad it was passed. We’ll continue to hold the Board accountable and continue to advocate for a commitment divestment.”

The board of governors previously voted against divestment back in 2014. Since that time, Divest Dal says it’s been working with an “ad hoc” university senate committee to move the idea forward.

Following a nine-day campout last November, Ayton addressed the board of governors once again calling for divestment. The board’s student representatives then put forward the motion that was finally approved this week.

Canadian universities have faced increased pressure in recent years from students and climate change advocates to extricate their endowment funds from any shares in the world’s top 200 coal, oil and gas companies.

Université Laval and the Atlantic School of Theology have already voted in favour of divestment, along with over 800 other institutions, municipalities and pension funds worldwide.

“This is an exciting moment for the Canadian divestment movement,” says fellow Divest Dal member Laura Cutmore. “On the 200th anniversary of the founding of our university, we have the opportunity to make history and show true leadership on the most important issue of our generation.”