Chill out, we’re talking about the legal kind. 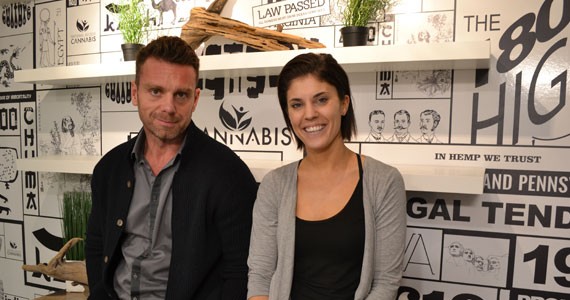 Rebecca Dingwell
Kenny Lord and Diandra Phipps want to give people with pain or illness another option.

"If we were having this conversation two years ago, people would think we're bananas," says National Access Cannabis' Atlantic Canadian manager, Kenny Lord. NAC has several storefronts in Canada, with its latest just opened at 5990 Spring Garden Road.

You can't stroll into the place and pick up a bag of weed—it's not a dispensary. With nurses and doctors on site, the staff finds out if cannabis is an appropriate treatment for what ails you.

Diandra Phipps (you might recognize her from enVie—A Vegan Kitchen) manages the Halifax store. She says some doctors aren't comfortable prescribing cannabis, while others don't have enough information about it.

"A patient from outside can get referred here as any doctor would refer to a specialist, whether it be a dermatologist, a pain specialist or what have you," she explains. Cannabis can help with issues such as anxiety, insomnia and multiple sclerosis. Folks like Lord and Phipps act as consultants, but NAC's physicians make the final call as to whether someone qualifies.

According to Phipps, most of the patients who come to the clinic are people over 40, and have been using prescription drugs with little success. "When we think of cannabis, we think of getting high," says Phipps. "You don't even have to have any psychoactive effect from this product anymore to gain access to the benefits."

Smoking a joint every day is far from the only option. "We motivate our patients to actually vapourize. It takes away that carcinogenic effect...it also, of course, preserves the really important compounds in the plant."

Cannabis is also available in the form of oils, pills and—well —edibles. NAC sells products to help you with your cooking and the Halifax location plans to host workshops on the topic, among others, next month.

"We really want to give all of our patients the tools, the resources they need to make sure they are getting the most out of this product," says Phipps.