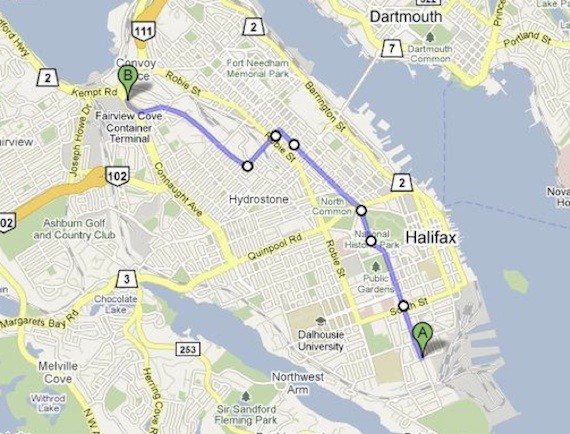 Cyclists and businesses are struggling to find middle ground in the discussion of a bicycle-friendly route in Halifax.

The Halifax Cycling Coalition has proposed the Crosstown Connector, a continuous bicycle corridor that runs from the south end to the north end, eventually connecting to the Bedford Highway bike lane.

The second of two public consultations for the proposed cycling corridor was held Tuesday night, with open discussion among cyclists, business owners and the public before the proposed route heads to council this summer.

“We’re very supportive generally, except that we’d like everyone to come out in the best possible position and not just one group,” says Bernard Smith of the North End Business Association. The loss of parking is an obvious concern.

Smith’s group is advocating for a route that runs along the streets between Agricola Street and Gottingen Street—Maynard and Creighton Streets—instead.

But Rob Soward, co-chair of the HCC, says that in terms of providing a continuous, safe and comfortable route, Agricola Street would best meet those criteria. “Given the number of major destinations along there and places that people frequent on a daily basis that are within a five kilometer trip, that really is the sweet spot for cyclists.” Soward says that in all routes proposed by the city, there was a loss of parking somewhere along the route but that some trade-offs have to be made.

“I think we need to focus on finding the best corridor that’s really going to be a success and then we need to start designing solutions to mitigate the losses for businesses,” he says.