Dalhousie University and local farmers parnter to a provide fresh, locally-grown alternative to cafeteria food in the form of a CSA. 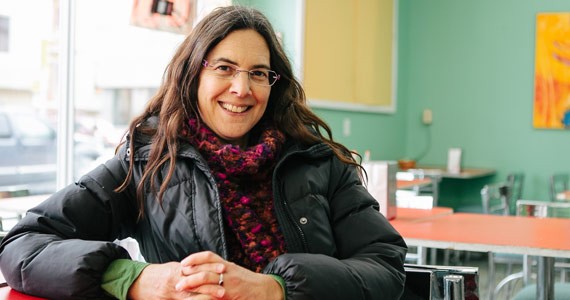 When it comes to student life, food choices can be limiting. Questions of cost, health and even ethics can affect what you choose to put onto your plate. But a group of people at Dalhousie are looking to change all that.

"Food is important. It's that simple," says Krista Holman, a member of The Loaded Ladle, a group that started in 2008 as Campus Action on Food, a project of the Nova Scotia Public Interest Research Group. In 2010, the non-profit co-op of students and community members was reborn as The Loaded Ladle. Its mandate is to provide non-corporate, affordable and fresh food to as many people as possible. Part of that includes providing information and education around food and food policies.

Frieberg runs Watershed Farms on the south shore. She had heard about the student organization and was impressed by its ideals. "I thought, how cool that there are people at Dalhousie who aren't just eating at the cafeteria and have a consciousness around food politics," she says. "I know it's not easy to do that because you're living a hectic and demanding schedule."

Frieberg approached the Ladle about starting up a Community Supported Agriculture program. "I had this idea that I wanted to reach more students on the campus and make it easy for them and the right choice," says Frieberg. For Holman and the rest of the Ladle's members, it was a great fit. "Students seem to be interested in both the model of CSA, as well as having in-season vegetables delivered on site," she says. "It's kind of like breakfast in bed."

The practicality of CSAs benefit both the farmer and the individuals who purchase them. Students buy a share that entitles them to a weekly box of seasonal produce. This makes things easier for farmers---it provides them with capital, as well in determining how much to grow. "Within the current structures, we often pull away from local small-scale producers and are forced to rely on corporate entities to provide us with our day-to-day nourishment," says Holman. "By supporting CSAs, students can empower our local food growers and support honest agriculture in Nova Scotia."

Starting in June, students can purchase a variety of CSA shares at various price points, and different times of the year, including a student share that begins in September.

Frieberg is not alone in her farming endeavours. Kevin Moran is a fourth-year plant science student at Dalhousie's agricultural campus in Truro. He runs The Chef's Garden, which provides food to the school's cafeteria. Although Moran loves providing for the students at his own campus, the reach of the Chef's Garden---as well as its financial possibilities ---was limited.

"I pitched the idea of a CSA to help make money for the Garden in a direct marketing way," he explains. "It makes the project sustainable."

For Frieberg, working with Moran is a great match. "I like the idea of a multi-farm CSA, so everyone contributes what they do best." And with the recent merger of the Nova Scotia Agricultural College and Dalhousie, Moran saw this as an opportunity for both campuses to get involved: "I think people in Halifax can benefit from it, and the NSAC can benefit from it as people learn about our school as well."

Holman and The Loaded Ladle agree that the benefits of a CSA aren't only culinary. "We want students to build relationships with local producers," she says. "Being a farmer is also increasingly difficult with the rise of industry, and if students can attach an actual human connection to their food production, perhaps it can influence positive change."

When Halifax turns into Burgertown!