The local expert on putting on a face breaks down how to clown in time for Halloween. 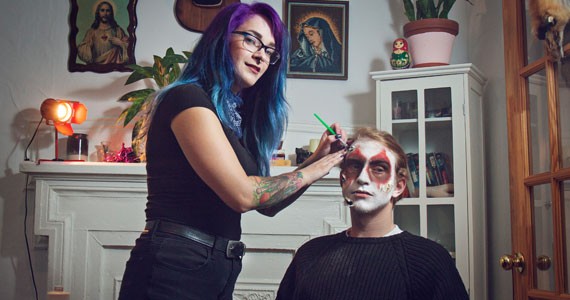 LENNY MULLINS
Munster puts some finishing touches on her model.

Elle Munster is a local make-up artist who has been in the business for almost seven years, getting clients ready for events such as weddings and proms. Halloween is the time Munster really gets to unleash her creativity, turning humans into mermaids or monsters. She met up with The Coast to chat about her work, offer some pointers and show us how to create a creepy clown face.

What are the most common requests you get for Halloween?
It's been clowns a lot—not gonna lie. Some questionable clowns. Harley Quinn is definitely a big one for women.

Any uncommon character you would like to do?
I've always wanted to do a gremlin. I also just like being given a little bit of creative freedom—just like, "I want to be this, but put your own spin on it." I really like that when it happens.

Do you have any tips for people trying to have their make-up last throughout a party?
Powder's your best friend. The Wolfe paints, they all dry, so you really don't have to worry about them. They sell those at Glow Parties, so it's pretty awesome that they have it locally. They're all water-based paints, so it's not the worst on the skin. You just want to make sure that you give yourself enough time to actually do it the way that you want it.

Is drugstore make-up a miss?
No, no. NYX Cosmetics is amazing. It's like a hidden gem. I do my late-night Shoppers runs because there's a Shoppers right on the corner. You'll catch me in the make-up aisle at like 11:30 at night.

Are the brushes you use from the art store?
Yeah. Especially with Halloween stuff, you put them through so much hell, there's no point in ruining your good make-up brushes for it. Even for bridal make-up, they're a great alternative and a lot cheaper—but made by the same companies.

Do you have any recommendations for fake blood?
Cinema Secrets is good. They have that at Glow Parties too. I used this dollar-store stuff on a film the other day and my hands were stained for a very long time. Definitely do a test run before you go and put it on your face.

Which make-up should people avoid?
Grease paints are probably the one to avoid, which are in most Halloween stores as the cheap version. The stuff never dries.

Is there a max amount of time someone should have make-up on their face for?
I don't know. I feel like it's one night of the year, what's a little bit of stained face gonna bother? You get to be a character. You have to put in the effort and suck it up sometimes.