Crafters in a dangerous time | Reasons we love the city | Halifax, Nova Scotia | THE COAST

Crafters in a dangerous time 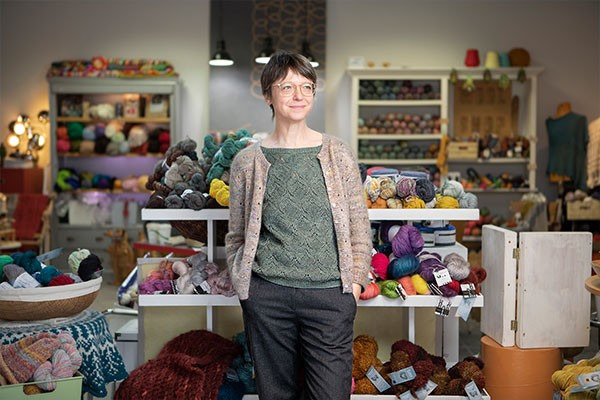 Chris Geworsky
Mimi Fautley, owner of The Loop, Halifax's go-to knitting shop on Barrington Street, says getting into crafting helped a lot of people feel productive during the pandemic.

What was the nicest thing you saw during the pandemic?
"Local craft stores switching to online delivery, making it easier for everyone to keep their hands busy and their minds occupied."

When word got out that masks could help slow the spread of COVID-19, Halifax's crafters rose to the task. And local craft shops were there for them every step of the way.

"I didn't think there was any possibility that we could do so well. But then, people were relentless in their pursuit of crafting," says Chris Pasquet, owner of fabric-and-sewing store Patch Halifax on Robie Street.

Although Patch closed its doors in mid-March and Pasquet laid off her only employee, soon she had to bring her back.

"I remember laying Elliot off, and then days later, I had to call Elliot and be like, 'I need you back.' Because immediately we started getting online orders like crazy," she says. "More than we'd ever had."

Patch transitioned into warehouse mode with curbside pickup, and messages began pouring in via social media, email and phone.

People "wanted to sew and they wanted to be making things, and I think they wanted to feel connected to something," Pasquet says. "Not necessarily to Patch, but just doing something with their hands and using their spare time in a way that made them feel good. And it just happened that we had the thing that they wanted."

Mimi Fautley, owner of The Loop on Barrington Street, says although the store lost its tourist traffic—which accounts for up to 40 percent of sales during the warmer months—the knitting shop adapted quickly, fulfilling the city's need to create with its hands by opening a web store in mid-March. "That went like gangbusters at first," says Fautley, "it was really good."

The digital crafting sphere provdided convenience and some serious inspiration. "The whole knitting and handwork revival is fueled by the internet and social media," says Fautley, "the fact that you're constantly exposed to other people's projects and inspiration in a way that didn't usually used to happen."

And those pandemic projects from amateurs and experts alike helped keep the virtual doors open and the lights on. "People are less apprehensive about taking on something that once seemed enormous—like a blanket or a sweater," says Fautley. "Because they're just like, 'What else am I going to do?'"

Selected answers to the question: What would have to change for Halifax to feel back to normal? Any live concert. » Getting to dance at The Dome or The Seahorse. » No masks in public. » Gatherings like the Jazz Fest. » Not hearing the word “Covid” on everyone's lips! » Weddings and funerals and physical closeness. » I'd get to sit next to my Mom and spend more than 30 minutes of supervised visitation with her in long-term care. » Full restaurants. » Less awkwardness in the grocery stores. » Cruise boats in our harbour. » What is normal? Let's keep this sort of slow and more intentional life!