COVID-19 news for the January 11 week

Quick looks at cases and more, in Halifax and Nova Scotia.

Editor's note: In its 28 years The Coast has never been a just-the-facts news service, but for these strange times here are quick-hit updates. 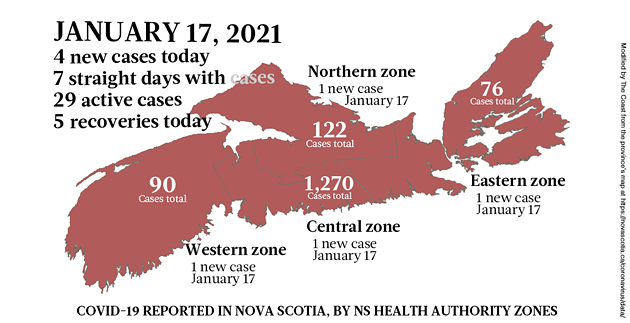 Four cases, all connected to travel beyond the east coast, doesn't sound particularly unusual. Heck, we had four travel-or-close-contact cases just yesterday. But the latest COVID-19 update from the province is actually quite rare. This is only the third time during the pandemic that every health zone in Nova Scotia got fresh infections on the same day.

"There is one case in each zone—Western, Northern, Eastern and Central," says the provincial C19 report. "The case in Central Zone is a student at Mount Saint Vincent University in Halifax who lives off-campus. All cases are self-isolating as required."

The last time the virus [insert sports term such as "hit for the cycle" or "ran the table"] was December 12. The first day it happened was early in the first wave on Monday, April 20, but we didn't register the unique province-wide spread at the time because there were 46 cases and it was the day after the horrific mass-shooting rampage.

Today's C19 report also has a correction to yesterday's report, which said a newly infected Cape Breton University student lives off-campus. It turns out the CBU student is living on-campus. Fingers crossed their ongoing self-isolation is indeed isolated enough not to infect a whole dorm. 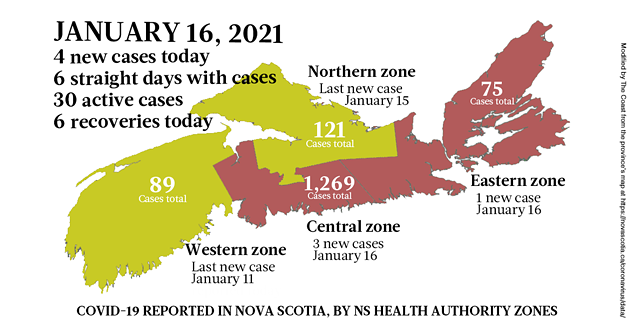 Another Cape Breton University student has been diagnosed, plus another Dalhousie student. They are two of today's four new COVID-19 cases. The province's C19 report says both students live off-campus—one in the Eastern zone capital of Sydney, where CBU is, the other in Dal's Central zone hometown of Halifax—and the patients are "self-isolating, as required."

Also self-isolating are the other two cases announced today, which are also in Central. All of the new cases are tied to either travel outside Atlantic Canada or a previously reported case, with no obvious signs of C19 community transmission.

"We continue to see low case counts of COVID-19 in our province and that is encouraging," says top doc Robert Strang in the province's update. "While this is good news, we must remember COVID-19 is still in our communities and we must all do our part to prevent its spread."

Two in, two out 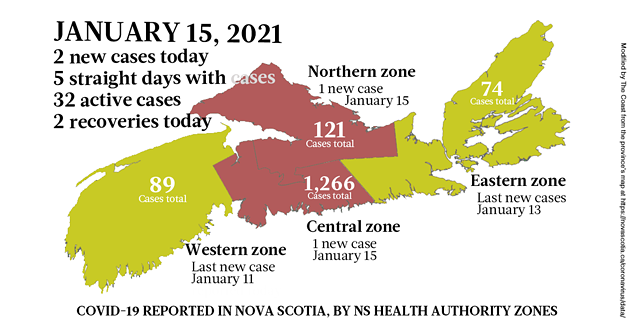 The case report from the province shows that Nova Scotia is keeping things neutral. Two people are newly diagnosed with COVID-19, and two patients are newly recovered. Nobody's in the hospital and no one's died from the disease.

"One case is in Northern Zone and the other case is in Central Zone," says the provincial update. "Both cases are close contacts of previously reported cases."

At today's C19 briefing, public health supremo Robert Strang expressed his disappointment at people who aren't being honest with public health investigators, which is apparently a thing. Strang also talked about a local restaurant owner who's making provocative noises against Covid protections—a Covocateur, if you will. The Coast's Victoria Walton has the full story from the briefing here. You should definitely check it out.

Premier Stephen McNeil and top doc Strang are scheduled to give a COVID-19 briefing Friday at noon. You can watch live at novascotia.ca/stayinformed/webcast, or catch it later at the Nova Scotia government's YouTube page.

The disease is winning 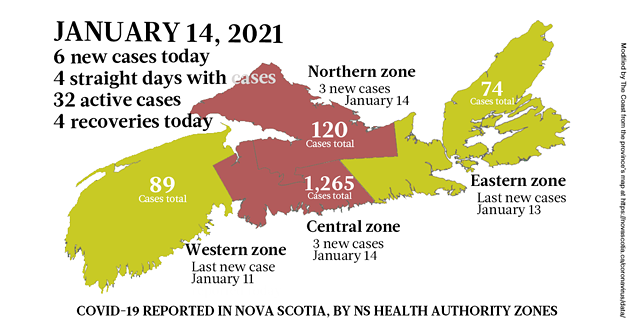 Nova Scotia is reporting six new cases of COVID-19 today, and only four recoveries. This makes the third straight day that the number of new infections has been higher than the number of patients who've recovered from the disease. Three days in a row, in other words, that the virus has been winning.

It's an unwelcome trend for 2021. From January 1 through today, there have been 63 new cases in Nova Scotia, compared to 53 recoveries.

We understand these are not large numbers. New Brunswick has reported 260 cases since the start of the year. Manitoba had 155 yesterday. And Ontario is averaging more than 3,000 daily cases in 2021.

Still, it's hard to be "a pandemic Shangri-La" when you're getting more infections than recoveries.

Today's cases are evenly split between the Northern and Central health zones. The three new patients in Northern are all linked to other patients, as is one of the Central zone cases. The other two in Central are connected to travel outside the east coast. "One of the travel-related cases is a student at Dalhousie University in Halifax who lives off campus," says the provincial C19 report, adding to the growing tally of post-secondary students starting the winter term with the coronavirus. 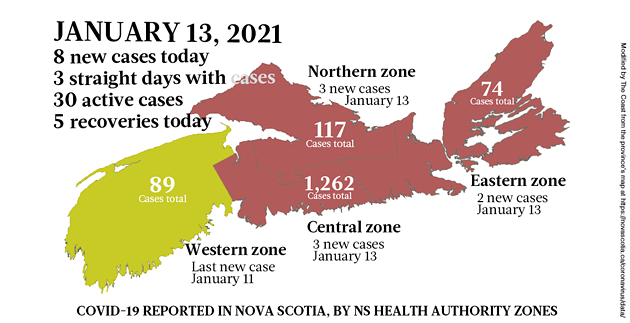 Cases have been low over the past week; from last Thursday through yesterday, Nova Scotia averaged just 2.5 new COVID-19 cases per day. Today is a different story, however, with the province announcing eight new infections.

Although the cases are scattered around the province, none of them are suspected of being community spread. Three of the cases are students at three different universities—CBU, St. FX and SMU—which feels like a lot. But there is no talk of uncontrolled transmission on campuses, so maybe all is well. ¯\_(ツ)_/¯

Here's how the province details the eight cases, copied and pasted straight from the report:

Three of the cases are in Northern Zone and are close contacts of previously reported cases.

Three of the cases are in Central Zone and are related to travel outside of Atlantic Canada. The people are self-isolating, as required. One of the cases is a student at Saint Mary's University in Halifax who lives on campus. 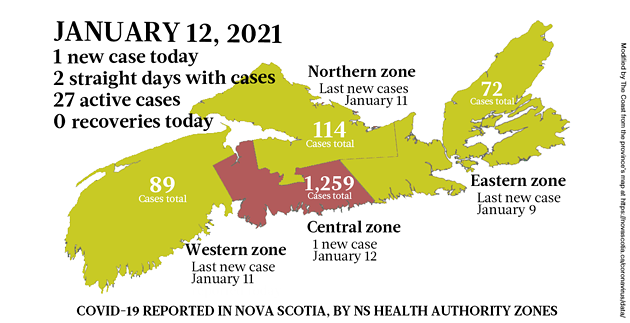 Not much COVID-19 activity today in Nova Scotia. There's a single new case. It's in the Central health zone, like most cases, and the patient is "a close contact of a previously reported case" as the province puts it. Nice and boring, no hint of community spread.

Things are boring in terms of old cases, too. Nobody who was already infected got better—we now have 27 active cases—but at the same time nobody's gotten worse, so there are no C19 patients in the hospital. All in all, this Tuesday is pretty Tuesday. And that's just fine by us. 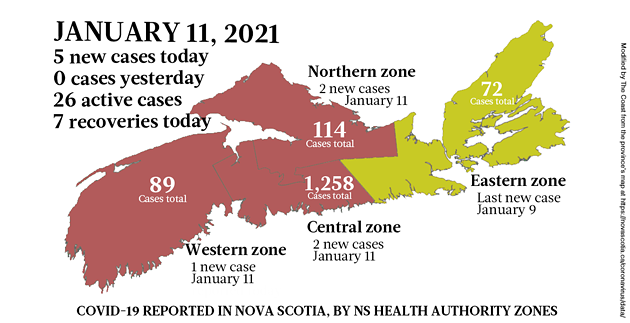 Just in case you are feeling smug about the lack of new cases Sunday, for the first time after 57 straight days of getting cases, doctor Strang has a wet blanket handy. "Yesterday we reported no new cases of COVID-19, which is good news, but it is not an indication that COVID-19 is no longer a risk," says the public health top doc in today's COVID-19 report.

Need more? Because the pandemic has more: five new cases for Nova Scotia today, including students at Dalhousie and Acadia universities. Here's how the C19 report describes them:

Two cases are in Central Zone and are related to travel outside of Atlantic Canada. The people are self-isolating, as required. One of the cases is a student at Dalhousie University in Halifax who lives off campus.

One case is in Western Zone and is related to travel outside of Atlantic Canada. The person is a student at Acadia University in Wolfville. The student lives on campus and has been self-isolating, as required.

Two cases are in Northern Zone. One case is related to travel outside of Atlantic Canada. The person is self-isolating, as required. The other case is a close contact of a previously reported case.

Today also marks an advance in the province's vaccination program, with the opening of what premier McNeil calls "the first clinic at a long-term care facility—Northwood's Halifax campus—and one at the Cape Breton Regional Hospital."

On the province's official case map, one case seems to have shuffled from the Central health zone to the Western zone, as happens occasionally. We're confirming with the province that this is intentional, but we're assuming it is, and have updated the numbers on our map to reflect the provincial version.

The province says premier Stephen McNeil and Nova Scotia chief medical officer of health Robert Strang are giving one of their COVID-19 briefings tomorrow. That's right—it's time for the latest episode of The Steve & Strang Show.

The fun starts at 3pm Tuesday. You can watch live at novascotia.ca/stayinformed/webcast, or catch it later at the Nova Scotia government's YouTube page. Be there or be under-informed.