COVID-19 news for the February 1 week

Quick looks at cases and more, in Halifax and Nova Scotia.

Editor's note: In its 28 years The Coast has never been a just-the-facts news service, but for these strange times here are quick-hit updates.

The Super Bowl of dad jokes 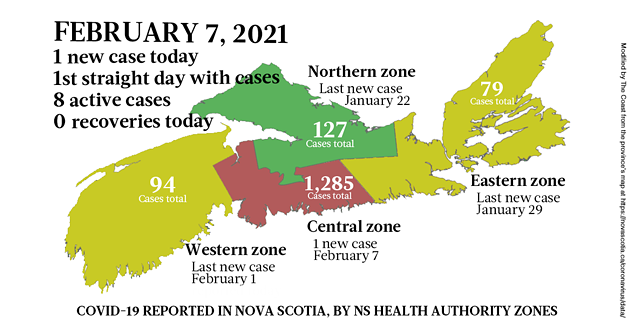 The Coast
Map of COVID-19 cases reported in Nova Scotia as of February 7, 2021. Legend here.

Today Nova Scotia is a place with one new case of COVID-19 (in the Central zone, related to travel), one new premier-to-be (last night Iain Rankin was elected next leader of the Nova Scotia Liberal Party), one patient in the hospital due to C19 (they're sick enough to be in the ICU) and one outgoing premier determined to end his tenure the way he lived it, as the province's dad-in-chief (whether that was disappointed dad, or Mad Dad McNeil or a mat-talking cheerleader).

"I know many people will be getting together tonight to watch the Super Bowl," McNeil says in Sunday's C19 update. "Let's remember to keep our huddles small and follow all the other public health measures."

Small huddles…get it? He's using a football term for when people get in a tight group, because the legal limit on gathering closely is just 10 people, and the Super Bowl is tonight, and apparently humans naturally want to assemble in big bunches to watch the big game, but that's totally dangerous right now because of the pandemic. Score a home run for sporty dad McNeil. Next-premier Rankin will have to lace his skates tight to keep up with such verbal gymnastics. 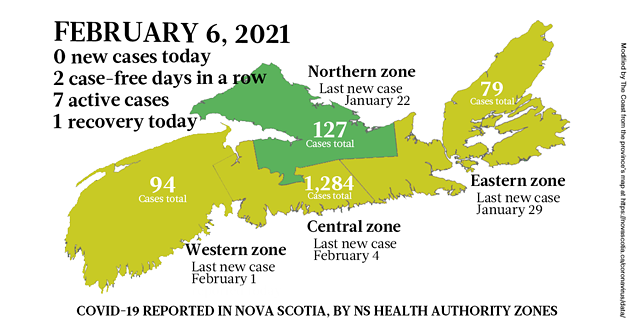 The Coast
Map of COVID-19 cases reported in Nova Scotia as of February 6, 2021. Legend here.

Nova Scotia is announcing no new cases. It's always nice to have a zero day, of course, and we've been enjoying getting them more often lately—there's been a handful in 2021, after just a single no-case day in all of November and December. But this one is particularly sweet because yesterday was also case-free, making this the second zero day in a row.

We haven't had two zero days in a row since October 28 and 29. That's a gap of 97 days, and during those days the second wave of COVID-19 arrived in Nova Scotia, and then was beaten down by Nova Scotians. Congratulations, everybody, we made it out the other side!

In other great news, one of the people who was in hospital as of yesterday's provincial C19 report has gotten out (sadly it's not the patient in the ICU). And the Northern zone has gone two full weeks without a case, graduating to green status on our map. The map hasn't had any green on it since December 4 (it was the Eastern zone), and the last time the Northern zone was green was October 29.

At just seven active cases, we're also at October levels. October 30, the day before Halloween, had six active cases. Every since day since has had more active cases than that, but today is the second lowest. With any luck a couple more patients will recover in time for tomorrow's report, to set a new record. 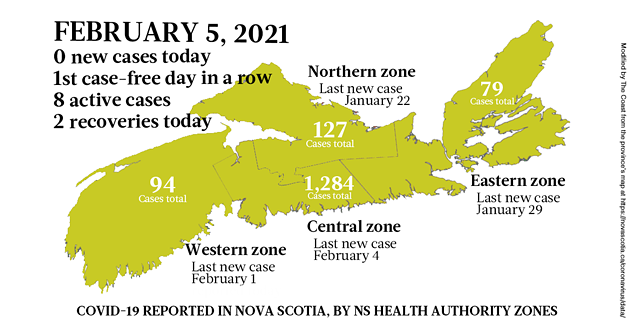 The Coast
Map of COVID-19 cases reported in Nova Scotia as of February 5, 2021. Legend here.

Reports—such as ours—that today's briefing would be Stephen McNeil's last were greatly exaggerated. And in the end, the retiring premier didn't even have to freeze time to stay relevant to the provincial pandemic response. He just had to mention at the briefing that he'll be staying on for a few more briefings, in order to best transition to his successor, who'll be announced tomorrow by the NS Liberals. Angry Dad and Healh Man ride again!

That said, this would have been a good day for the premier to go out on. The province is reporting zero new cases of COVID-19, as well as two recoveries, for a current total of just eight active cases. This is the lowest the active number has gone this year, beating the mark of nine active cases reached a week ago on Friday, January 29.

Or maybe McNeil wants to see the hospitals cleared before he feels his job is done. And right now there are still two patients sick enough to be hospitalized, one of whom is so unwell as to be in intensive care. Whether or not McNeil has tied his fate to them, we continue to send both patients well wishes and good vibes. 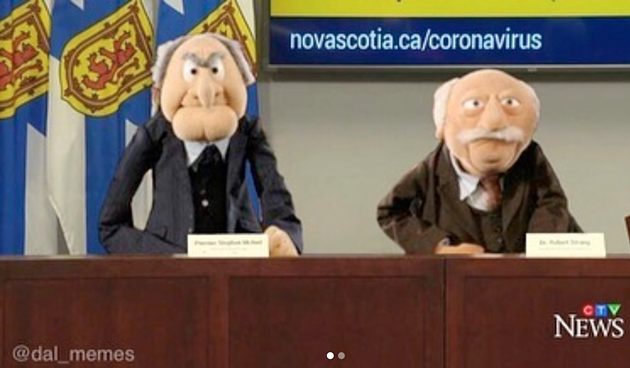 @Dal_Memes
McNeil and Strang as Muppets Statler and Waldorf is the association that stuck to Nova Scotia's disease-fighting duo.

This is premier Stephen McNeil's last full day on the job. Tomorrow (if there is a tomorrow) the Nova Scotia Liberal Party will announce its new leader, effectively instantly turning that man (yeah, the candidates are all dudes)  into the province's next premier and letting McNeil off the hook. So it's fitting that McNeil would hold one more COVID-19 briefing on his way into retirement.

McNeil will naturally be joined by his partner in virus-fighting, provincial top doc Robert Strang, making this briefing the series finale of The Steve & Strang Show, the farewell to Angry Dad and Health Man, must-see Covideo. Expect laughs, tears and admonishments to wash your hands.

The briefing starts at 1pm. You can watch live at novascotia.ca/stayinformed/webcast and/or @nsgov on Facebook, or catch it later at the Nova Scotia government's YouTube page. Show the blazes up! 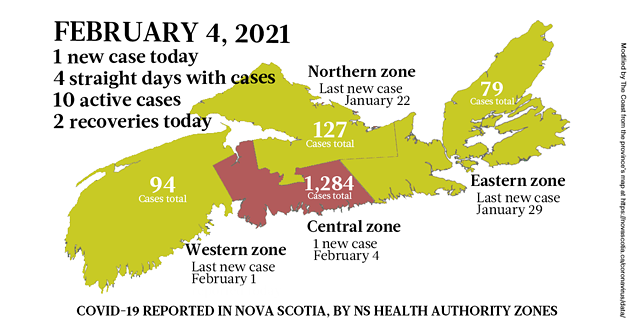 The Coast
Map of COVID-19 cases reported in Nova Scotia as of February 4, 2021 (unless it turns out time hasn't been moving since February 2). Legend here.

We've already taken this whole Groundhog Day/Groundhog Day thing too far. We understand. But really, besides Nova Scotia being trapped in a time loop, what other explanation could there be for the identical case reporting that's happened since February 2?

Today the province is reporting one new travel-connected COVID-19 infection, and it's not in the Western, Northern or Eastern health zones. Or as the provincial update to media has put it the Exact. Same. Way for three days straight: "The case is in Central Zone and is related to travel outside of Atlantic Canada. The person is self-isolating, as required." In other looping echoes, "Two people are currently in hospital, including one in ICU."

Now that we're stuck in time, Nova Scotia's Liberal Party won't be able to have its virtual convention on Saturday to pick a new leader, which means Stephen McNeil will be premier forever.

Hey, wait a second… [sound of thinking]…maybe somebody's getting cold feet about retiring… [more thinking]…and maybe passing the torch is easier said than done…[sound of coming to an implausibly plausible conclusion]…

Premier McNeil, did you use your powers to freeze time?!?!

And would you mind un-freezing it? (Asking for those two people trapped for eternity in the hospital.) 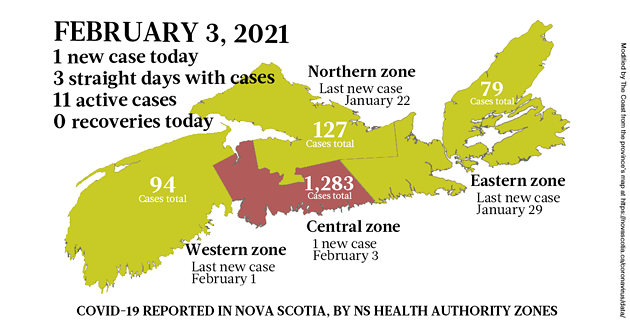 The Coast
Map of COVID-19 cases reported in Nova Scotia as of February 3, 2021. Legend here.

Also, both reports have the same information about hospitalized Nova Scotians. "Two people are currently in hospital, including one in ICU."

That's right, quite a strong case that we're trapped in some hellish loop. And in said loop, is the Central health authority zone Bill Murray's Phil Connors character? Or is Phil the freshly diagnosed patient, making Central more the Punxsutawney setting?

Actually, don't fall too far down that groundhog hole, because there's a chance the days are actually different. The "Wednesday"—we mean Wednesday—provincial C19 update has no patients recovering, while someone recovered Tuesday, bringing Nova Scotia to 11 active cases. So the days aren't identical at a molecular level. But despite their individual quirks, we are still under the state of emergency first announced last March, continuing to face gathering restrictions and hoping, hoping to drive the numbers down. Stuck, in other words, in a hellish loop. 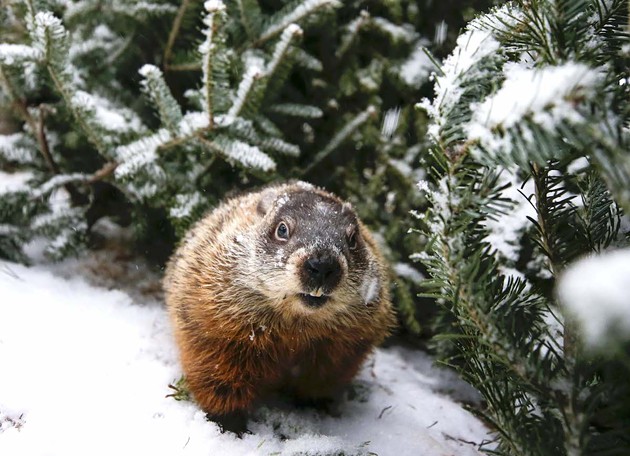 OK campers, rise and shine, and don't forget to wear a mask 'cause it's pandemical out there today. That blizzard thing didn't stop Shubenacadie Sam from going for a walk this Groundhog Day, and provincial observers assure us she didn't see her shadow, so spring comes early this year.

OK campers, rise and shine, and don't forget to wash your hands 'cause it's pandemical out there today. There's one new COVID-19 case and one recovery in Nova Scotia, just like yesterday. The fresh infection is travel-related and the patient lives in Central health zone.

OK campers, rise and shine, and don't forget to limit social contacts 'cause it's pandemical out there today. There are 10 active C19 cases in the province, just like yesterday. Two of those patients are in the hospital—with one of them in ICU. Just like yesterday. 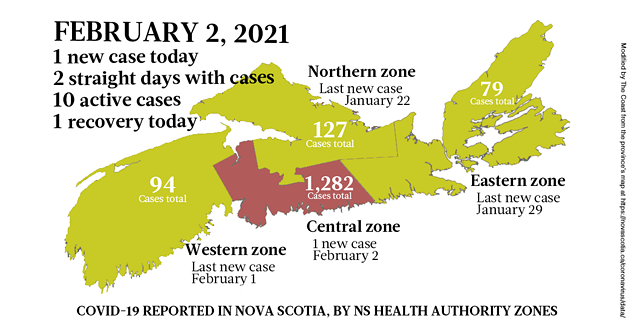 The Coast
Map of COVID-19 cases reported in Nova Scotia as of February 2, 2021. Legend here like it always is.

OK campers, rise and shine, and don't forget to maintain physical distance 'cause it's pandemical out there today. Doctor Strang and premier McNeil didn't have one of their standard Tuesday briefings, probably due to that blizzard thing, but they are having one tomorrow at 3pm. You can watch live at novascotia.ca/stayinformed/webcast and/or @nsgov on Facebook, or catch it later at the Nova Scotia government's YouTube page. Like always.

OK campers, rise and shine, and don't forget to stay home if you're feeling sick 'cause it's pandemical out there today. The province's C19 update has yet another message from Strang extolling the virtues of personal anti-coronavirus measures, the sort of thing we've been hearing nearly every day for what feels like 10 years: "We can limit the spread of the virus by continuing to wear a mask, limit social contacts, maintain physical distance, wash our hands and stay home if feeling unwell."

One on the first 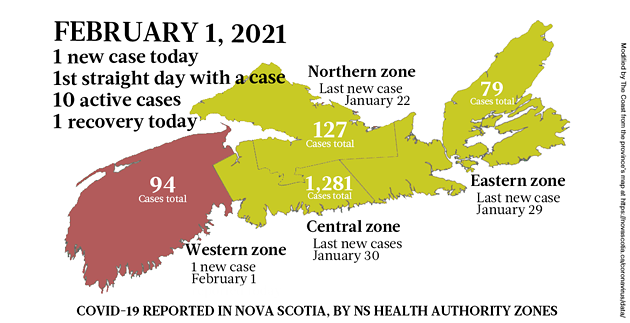 The Coast
Map of COVID-19 cases reported in Nova Scotia as of February 1, 2021. Legend here.

"We are seeing very few, if any, new cases each day, which is encouraging news," says Nova Scotia's chief medical officer of health, Robert Strang, in the Monday COVID-19 update. He's right. It's encouraging to get a day like today to start the week and the month—one new case, in the Western health authority zone, a close contact of another case.

Strang's partner in being the official face of Nova Scotia's C19 response is also right when he says low numbers don't mean a low threat. "The virus is always looking for an opportunity to spread," says premier Stephen McNeil, "which means we must continue following all of the public health protocols to protect each other."

A patient has recovered to go with the new case, for a current total of 10 active cases in NS. And just like the last couple of days, the province's report says two of those 10 patients are sick enough to be in the hospital, one so sick they're in the ICU.