Aaron Mangle enjoyed playing with a band so much that he turned his solo act into a family of players. 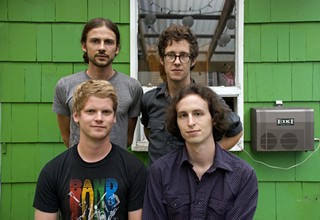 Being a songwriter who doesn't particularly like writing lyrics is a surprisingly good way to come up with some of the most evocative songs Halifax will see this year.

Aaron Mangle has developed his unique songwriting technique in two years of playing solo in Halifax under the name A Helpful Diagram. Last winter he recorded Out on Town, with Stacy Lloyd Brown engineering, filling out the songs by playing all the instruments himself. The thought of paring the music down again to perform solo didn't appeal to Mangle, so he enlisted Dallin Ursenbach (Crowd Power) on guitar, Andy March (Museum Pieces) on drums and Pat Ryan (roomdoom) on bass last spring, and, just like that, A Helpful Diagram became Cousins.

"I kept wanting to be way louder," says Mangle. "When I'd play at Gus' I kept imagining that it would be this loud rock show, but it was sappy and not very loud." After seeing Cousins at a recent show at the Khyber, it's evident that volume is no longer a problem. During the powerful live show, the delicate songs on Out On Town are swathed in fuzz, creating possibly the prettiest wall of noise. Cousins masterfully blends a jangly and playful live show with dreamy, folk-influenced songs.

In contrast to the so-called "sappy" origins of the songs, one of Mangle's current goals is to "keep things playful. I think because I was playing solo, the songs sounded sad and I was writing songs that were really sad, and once you listen to really happy music you're like, 'Oh fuck, I feel like such a loser.'" Presently, Mangle is influenced by "a lot of sunshine-y bands, California bands like Cryptacize, Thee Oh Sees, Deerhoof." He doesn't think that he has a lot in common with them, but Out on Town would fit perfectly within the ranks of John Dwyer's (Thee Oh Sees) label Castle Face, or Sufjan Stevens' Asthmatic Kitty Records.

Lyrically, Mangle doesn't rely a lot on deep, personal stories, instead choosing to pick "one simple thing and think about it." It's refreshing to listen to an album and not have to witness the performer as a raw nerve ending. Mangle chooses to leave his darkest thoughts and details about his relationships private. Instead, his songs are about getting lost in a foreign city, or playing dice.

"I don't really want to write what my feelings are, definitely the songs are not about feelings," says Mangle. "I'm really hard on myself when I'm writing, and that's probably that's why there aren't many words. When I'm flipping through a book of poetry---which is really rare, but the other night I was---I always stop at the pages that have short verses and I don't read the long ones.

"I really prefer a really good phrase, or words that are really simple, or a play on words," he continues. "Just making the words simple so they are a little bit aloof. I don't want to say it all."

Cousins release Out on Town on Friday, August 28 at the Khyber ICA with Data Cave and Duz He Knew? before setting out on a 15-date tour in September through Ontario and Quebec, including a showcase at Pop Montreal.

Cousins: Out on Town