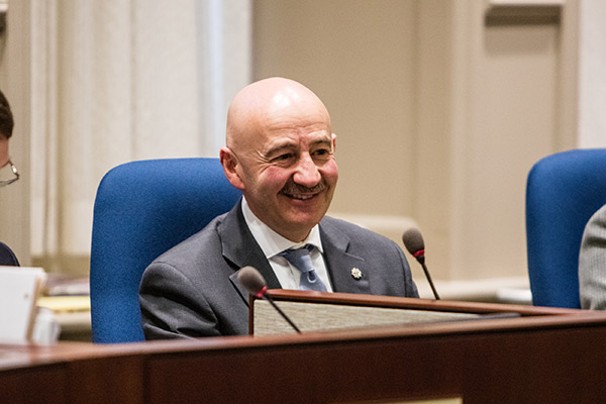 RILEY SMITH
Tony Mancini, pictured in happier times.
It was the Sobeys bag that broke the camel’s back.

A staff report before council recommended the municipality work with the province to ban the use of shopping bags in all Nova Scotian municipalities and that city staff come back with a “recommended option” for eliminating plastic bags in HRM.

Councillor Tony Mancini told his colleagues the latter would take the form of a staff report with a draft bylaw.

His fellow Environment and Sustainability member Bill Karsten said drafting a bylaw would be “premature,” and accused an “emotional” Mancini of “undermining” the committee’s original recommendation.

Mancini erupted at his colleague’s comments; laying into Karsten for his habit of interrupting debates with sarcastic asides and exaggerated pantomime.

“It’s OK for [Karsten] to bang on the table?” Mancini said to the mayor. “It’s OK for him to speak when someone else is speaking?...That’s why I wanted to have the Code of Conduct reviewed!”

The councillor previously put forward plans to beef up HRM’s Code of Conduct for elected officials. It was soundly rejected. At the time, Karsten said he was personally insulted and “appalled” at the idea.

“Councillor Mancini, if you thought I was banging and slapping on my desk, you’re sadly mistaken,” said Karsten. “But I don’t like to be undermined.”

“I wasn’t undermining” began Mancini, shaking his head. Councillor Waye Mason then put his hand on Mancini’s shoulder to stop him from saying anything further.

It was one of several tense moments during the discussion that also saw councillor Richard Zurawski call-out Karsten and Shawn Cleary accuse his colleagues of “timidly limping towards mediocrity.”

“There are some remarks being made around the table that are idiotic in nature,” stated David Hendsbee in an unprompted “editorial comment.”

Ultimately council voted for a staff report on the logistics of banning single-use bags in HRM, and to urge the province to consider banning the environmentally harmful product across all of Nova Scotia.

A motion to reaffirm HRM’s support for Extended Producer Responsibility (EPR) also passed, despite councillors Whitman and Adams criticizing the idea. Both councillors previously voted in favour of supporting EPR—or putting the burden of responsibility on the producers of waste—back in 2014.

“If I voted in favour of it, I don’t recall doing that,” said Whitman.

It’s estimated between 300 and 500 million grocery bags are used annually in Nova Scotia. Film plastics at HRM’s recycling facility account for 1,400 of the 28,000 tonnes collected each year.