Council is still meeting virtually, but you can enjoy an outdoor holiday light show every day until 2021 at City Hall.

At this week’s Halifax Regional Council meeting, District 7 councillor Waye Mason got a last-minute item added to the agenda, concerning HRM’s upcoming review of rental requirements. Mason asked for the review to include bylaw options for strong penalties "up to and including the maximum statutory amount"—which is $10,000—"and rapid responses to mediate any unit where in the opinion on the municipality a landlord has deliberately made the unit uninhabitable or non-compliant."

The update, which is scheduled to come to council in April, will include revamped standards for rental accommodations and an unveiling of HRM's plan for a mega-landlord registry. An update that takes on a new meaning after the province's announcement of temporary rent control measures and a ban on evictions.

The behaviour Mason is specifically interested in stopping is a situation where someone was in arrears on their rent, and perhaps is awaiting a trial with the tenancy board or an appeal, and as such is still living in their apartment but not paying rent. In some cases, it's people who've been handed huge rent increases and simply can't find anywhere else to live due to low vacancy and rising prices.

“The fact that people are openly talking about deliberately making it so those standards are not met really is problematic," says Mason. "To me, I find it appalling." 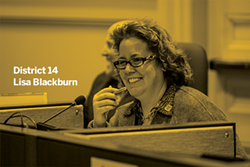 Councillor Lisa Blackburn wanted to ensure that land lease communities where people own the trailer they live in, but not the land it's sitting on, are also included in this item and all of the upcoming updates.

Councillor Paul Russell urged that not all landlords are bad, adding that the province's recent rent control decision will dis-incentivize landlords from keeping places nice and affordable to live in, and will lead to a deterioration of the rental housing stock. He says he agrees with Mason's motion, but hopes it doesn't have to be used often.

Since September 15, HRM has been posting reported residential standard violations on its open data portal. Citizens can see the building with a violation, how long it took to get it fixed, and whether or not landlords are complying with the time allotted—or how well HRM is enforcing its own timelines.

The debate centred around the moral question of who should receive empathy when a bad situation keeps getting worse: The tenant who isn't paying their rent—for whatever reason—or the landlord who isn't getting their money and is taking off doors and taps as a result.

Councillor Pam Lovelace
Councillor Pam Lovelace weighed this, saying "at the end of the day if we are encouraging in some way a system that supports bad landlords, then we need to be held responsible and put in regulations and by-laws, and enforce those by-laws to make sure that landlords know that Halifax will not put up with it."

Click here to see what else happened at council this week via The Coast's live reporting on Instagram Stories, or watch this YouTube video of them strung together.