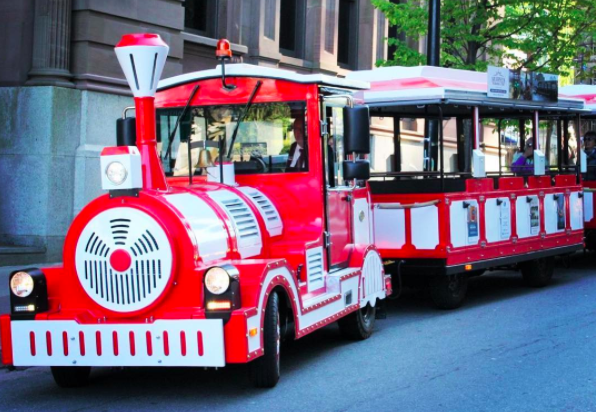 VIA INSTAGRAM
The closest thing we have to commuter rail.
The Halifax “road train” will have to conduct its business without any funding from city hall.

A vote at to provide $50,000 in municipal money for the downtown people-mover was defeated by an 8–8 tie on Tuesday. Councillor Waye Mason, a member of the Halifax Community Road Train Society, recused himself from the vote.

Ambassatours originally set up the faux-train experience (it drives on wheels over city streets) back in June as a way to counter the tourism-poison of Queen’s Marque construction.

Owner Dennis Campbell approached the city for $120,000 in municipal funding for operations over the next three years. Staff advised against it, but council conditionally approved the idea provided a not-for-profit be set up as the recipient of the funds instead of a private business.

The aforementioned Road Train Society—which counts Mason and personnel from Waterfront Development and the Downtown Halifax Business Association amongst its members—was created in response.

That was just the ticket for HRM’s finance committee to offer its rubber stamp on the funding, but councillor Sam Austin railed against the “arms-length” shell society at Tuesday’s meeting.

“What does the society actually do?” asked Austin. “As far as I can see, the entire reason for this society to exist is to take money from us and others and transfer it through to Ambassatours.”

Ambassatours bought the contraption not knowing if it would receive public funding, said Austin, so presumably, the company has some working business model in mind without the need of a smokescreen non-profit.

“All they are is a body to move funds from point A to point B and I just don’t think that’s good enough,” Austin said about the road train society. “We have a non-profit that owns and does nothing, and has come into existence for the sole reason of collecting money for a for-profit business.”

The red-and-white “road train” runs a loop along Lower and Upper Water and Hollis Streets. The apparently female vehicle is paid for by advertisements and suggested passenger donations of $2 to $5.

The project raised just over $77,000 from rider donations and an additional $90,000 from selling advertisements on stops and train signs over the past summer and fall season. Gross profits for the year are expected to equal $4,500, even without the requested $50,000 from HRM.

A motion from Austin to defer any funding decision pending a new staff report on the road train society was shot down, leading to the tie vote and the original funding request’s defeat.

Ambassatours will have to wait until next year to apply again for any city money.