City hall and Assembly of Chiefs quiet on Wilbert Marshall’s past and his potential involvement in eagerly anticipated Halifax committee. 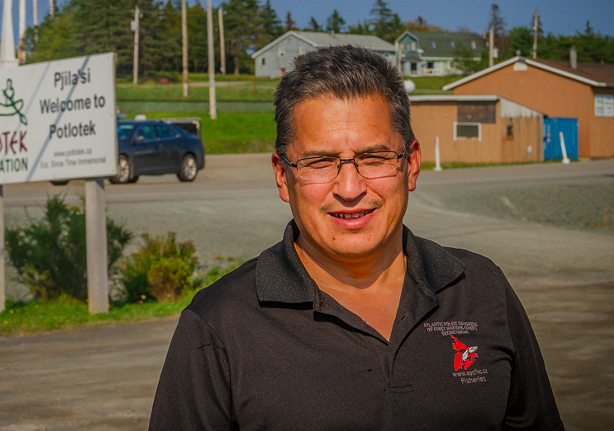 Stephen Brake, for KuKukwes
Chief Wilbert Marshall is one candidate proposed by the Assembly of Nova Scotia Mi'kmaq Chiefs for Halifax's Cornwallis panel.
One of the names put forward to judge the actions of Edward Cornwallis has a violent history of his own.

Chief Wilbert Marshall, who has been selected by the Assembly of Nova Scotia Mi’kmaq Chiefs to help lead Halifax’s examination of the city's controversial founder, was himself convicted of sexual assault 10 years ago.

Marshall was sentenced in 2008 to three years for sexually assaulting an unconscious 20-year-old woman in a Dartmouth hotel room. The 39-year-old had been visiting Halifax at the time for a meeting in his role as Chief of the Potlotek First Nation in Cape Breton.

Heather Knockwood, formerly of the Atlantic Policy Congress of First Nation Chiefs, tells The Coast that both she and Marshall are on the list of names put forward by the Assembly of Chiefs to HRM.

Other nominees on that shortlist allegedly include We Were Not The Savages author Daniel Paul, Mi’kmaw linguist Bernie Francis and Mi’kmaw Native Friendship Centre executive director Pam Glode-Desrochers.

Francis could not be reached for comment. Both Paul and Glode-Desrochers declined to speak about the panel and their involvement. Repeated calls to Marshall’s home went unanswered.

Crystal Dorsey, spokesperson for the Assembly of Chiefs, wouldn’t comment on or confirm the list of names, which still has to be formally approved by Halifax council.

“We’re still waiting to meet with HRM on it, as far as I know,” Dorsey says. “It’s a decision that’s with the Chiefs right now. I’m not privy to those conversations, so you and I know the same information.”

Knockwood says she was sent an email late last year confirming her nomination and listing the other four names. She was unable to share a copy of that email with The Coast, but a source with knowledge of the document confirms one of the nominees has previously been convicted of rape.

Marshall’s potential inclusion on the panel could ignite more debate around a delayed process that’s already been fraught with tension. Members of the public and elected councillors have both lamented the panel’s necessity, questioned the impartiality of Indigenous voices and uttered racist comments throughout the past several months whenever the word Cornwallis is mentioned.

But his prior conviction shouldn’t have any impact on the committee’s work, says Knockwood. Potlotek voted Marshall back into office, “so the people are OK with it,” she says. He’s paid for his crimes.

“He knows what he did and he learned from it.”

According to Chief Justice Joseph Kennedy’s decision, on the night in question in 2006, Marshall had visited a home where the young woman was studying and convinced her to go to a strip club. After spending the night buying her liquor, Marshall assaulted the woman in his hotel room while she was passed out and covered in vomit.

Marshall told the court during sentencing that he was sorry, and claimed at the time of the assault that he was unclear about the meaning of consent.

During the trial, two other Mi'kmaq Chiefs and a professor at Cape Breton University spoke out in Marshall defence, suggesting the accusations were made-up and politically motivated. Justice Kennedy called those statements “ridiculous,” “irrational” and  “bizarre.”

Kennedy called Marshall’s behaviour “disgraceful” and unbecoming of a “moral community leader.” He also took issue with Marshall’s “dwelling on the fact that the offence has ruined his life,” as described in the pre-sentence report.

“You lament sir that your conviction has cost you your position as Chief and I can only say to that sir, I certainly hope so,” said Kennedy. “I hope that that is one of the ramifications of your behaviour in this matter.”

Under the federal Indian Act, Marshall was automatically stripped of his title of Chief upon conviction. But that same legislation doesn’t prohibit a person, once convicted, from running for office in the future.

Two years after his conviction and one year after being released on parole, Marshall was re-elected as Chief by just five votes. He’s served in that role ever since, while also acting as the lead for culture, heritage and archaeology with the Assembly of Chiefs.

Even in that heritage advisory role, Marshall's participation in the Cornwallis panel wasn't a foregone conclusion. Knockwood says he would have had to apply and be chosen by the Chiefs.

“[The Chiefs] could have selected anyone, so I don’t see how [his conviction] would have anything to do with it.”

The daughter of the revered chief John Knockwood, Heather says she's looking forward to working with HRM on the Cornwallis panel and that it will be an “honour to serve.”

“I think we all need to hear, without it becoming a little bitch festival—I don’t know the proper word for that—but we need to come to a solution where it’s win-win,” she says. “I can’t wait to get this conversation going, because the sooner we can work things out, the smoother I think it’s going to be.”

Halifax Regional Council approved the Cornwallis panel last October after years of public conversation regarding the former military commander’s treatment of the area’s Indigenous population. Half of its members are appointed by HRM with the other half coming from the list of nominees submitted by the Assembly of Chiefs.

Municipal spokesperson Erin DiCarlo says HRM staff will return to council to make the final appointment of all committee members “in the coming weeks.”

A final report on what to do with the statue, park and street named in Cornwallis’ honour won’t likely be completed until six to eight months after the committee is finally brought together.

None of the panel’s recommendations will be binding. The ultimate decision about what to do about Cornwallis always has and always will reside with Halifax council.

But if Marshall isn’t welcomed with an open mind by HRM residents and other panellists, Knockwood says the committee could end up derailed before it even gets started.

“I’d have to walk out if there was any disrespect [towards Marshall],” she says, defensively. “This will collapse if they’re not willing to participate in good faith.”