“Listen, if it was up to me and you, we’d go take our chains and a pick-up truck and go take it down right now,” says Shawn Cleary. 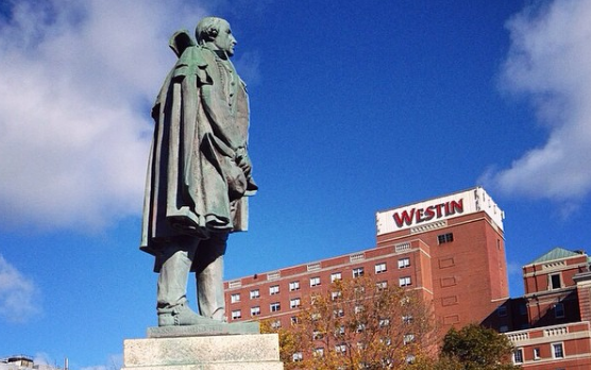 via edwardcornwallis_wanted on Instagram
This statue of Edward Cornwallis stands in front of the Westin hotel in Halifax's south end.
It’s been over a week since Halifax Regional Council voted for an expert panel to examine how the city commemorates its problematic founder, but there’s still no word on who will take part.

Officially, HRM has four names selected. Those individuals are being contacted by city staff for confirmation. Another four names will be selected by the Nova Scotia Assembly of Mi’kmaq Chiefs. The finalized group will then begin a process of historical analysis and public consultation that'll last another six to eight months.

It’s an irritatingly slow process, no matter which side of the Edward Cornwallis debate you subscribe to. Councillor Shawn Cleary shares that frustration. But hey, that’s government for you.

“Listen, if it was up to me and you, we’d go take our chains and a pick-up truck and go take it down right now,” says the Halifax West representative. “That’s not how government works, and unfortunately, I’m now a part of .”

Cleary introduced the idea of an expert panel back in the spring—ironically inspired by a performance from HRM poet laureate Rebecca Thomas that was written about the previous, narrowly defeated, debate on Cornwallis a year prior.

It's perhaps a sign of progress that this latest request for an advisory panel easily passed, with only two votes against. But its recommendations will be non-binding. Council will still have to open up another round of debate on Cornwallis before making any decisions.

“What is going to be awesome at the end of this process is that, yes it’ll take long, but hopefully we will all be together in how we got there,” says Cleary. “I'm hopeful that this is a real learning opportunity for us as a city.”

Edward Cornwallis founded Halifax on orders of the British—and in violation of treaties with the Mi’kmaq—in 1749. That same year, the future governor of Nova Scotia issued a proclamation for Mi’kmaw scalps in an effort to drive out the area’s Indigenous population.

Centuries later, colonialist sympathies caused Cornwallis to be honoured with a north-end street, south-end park and bronze statue fashioned in his image.

Over the past few decades, however, calls to rethink why Halifax continues to celebrate an intolerant military commander have steadily increased.

During last week’s vote, several elected official offered their reassurances to the public that progress is—slowly, but surely—being made.

“The statue went up in 1931,” says Mike Savage. “It wasn’t until last year [that] a motion went to council….Governments always have processes, but whatever has to be done in a way that has integrity.”

“I know it’s been a hard trail, but this is the first time we’ve actually been able to have this discussion,” Peninsula North councillor Lindell Smith told his colleagues. “So it’s going to take time. A lot of us would like this process to move faster, but we’re working in government.”

Back in July, some 300 people not working in government gathered at Cornwallis Park to try and topple the statue on their own—policy and process be damned. Instead, as a compromise, Cornwallis’ visage was covered (briefly) with a municipal tarp.

The organizers of the protest then presented the mayor with a call to action, asking him to remove the statue before Mi'kmaq History Month in October. Although Savage politely accepted the document, little came of its central demand.

Instead, the mayor says the municipality is strengthening its ties to Halifax's Mi’kmaw residents through several ongoing initiatives. A staff report on the effectiveness of HRM’s commitment to truth and reconciliation, for instance, should be back to council in the next few weeks. The city is also on the verge of hiring its first ever Indigenous advisor. It recently approved a motion to try and help relocate the Mi’kmaw Native Friendship Centre, and HRM has plans for creating a Legacy Room inside City Hall.

“Our relationship with the Mi’kmaq is very important, and I think that they recognize that we’re taking steps in that direction,” says Savage.

The Cornwallis panel is another of those steps in the right direction, according to Cleary—a step towards rebuilding the relationship between settler Canadians and First Nations.

It’s just going to be a while before we get there. Making history takes time.