Get more stories like this delivered to your inbox by signing up for The Coast Daily newsletter.
Following an allegation of sexual assault from a provincial NDP candidate, Troy Myers, CEO and librarian of the South Shore Public Libraries, has withdrawn from running in the federal election. Myers was representing the Conservatives in Dartmouth-Cole Harbour.
click to enlarge 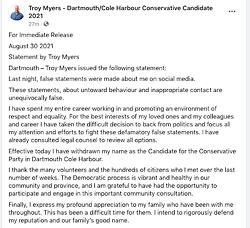 via Facebook
Troy Myers’ statement about dropping out of the Dartmouth-Cole Harbour election.
Myers posted a statement on his Facebook page Monday morning denying the accusation, but says “for the best interests of my loved ones and my colleagues and career I have taken the difficult decision to (step) back from politics.” Myers has not responded to request for comment.

On Tuesday the South Shore Public Libraries board said in a statement that Myers has been placed on administrative leave while it meets to "review the allegations and consider its next steps."


Sunday evening, recent provincial candidate Lauren Skabar posted on Twitter that she met Myers in October 2019 at a Nova Scotia Library Association conference. During the conference Myers referred to himself as Skabar’s “future boss” and commented on “that tiny skirt” before tugging on the hem, she says in the post.

“Before I could say anything, he put his hand up the back of my skirt and into my underwear. When I objected, he told me that was no way to talk to my ‘future boss.’” Skabar says in the post.

(TW: Sexual assault) I met Troy Myers in Oct'19 at the NS Library Association conference, hosted by South Shore Public Libraries where he's Chief & CEO. He told me he admired my excitement about the field, and how nice it was to have someone new to the profession attending (1/6) pic.twitter.com/5tN8yTPlUe

When reached this morning following Myers’ statement, Skabar says she’s “very relieved” that Myers decided to drop out from the race.

via Twitter
Tweets from Lauren Skabar detailing assault allegation against Troy Myers.
Skabar, who ran this summer under the NDP banner in the Cumberland North riding that independent MLA Elizabeth Smith-McCrossin won, is a recent graduate of Dalhousie University’s master of library and information studies who’s worked with the Cumberland Public Libraries.

In the August 17 provincial election, Skabar came in third behind the MLA best known for leading the New Brunswick/Nova Scotia border blockade, and Liberal Bill Casey. Smith-McCrossin was removed from the Progressive Conservative party and won as an independent. Election day for the federal election is September 20. The Conservatives have not yet named a new Dartmouth-Cole Harbour candidate.

Note: this story has been updated to include a statement from the South Shore Public Libraries board of directors.