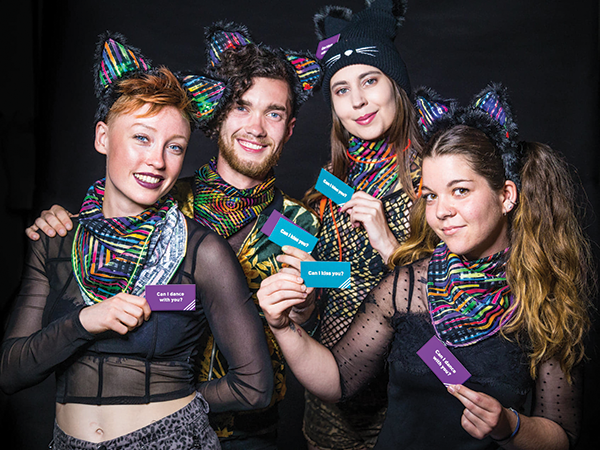 When his friends began avoiding the music festival scene due to one too many negative experiences on the dance floor, long-time festival-goer James MacDonald knew it was time for change.

In 2017 MacDonald floated the idea of what it would be like to have a point person attend shows with the sole role of facilitating consent awareness. Friends and like-minded individuals quickly took up the cause.

Today, roughly 20-30 Kitties make up the group Consent Kitties, a pro-consent group of cat ear-wearing volunteers for hire by music festivals and the occasional local venue to foster a culture of consent.

Jo Smith, student and arts organizer, has been active in consent work since 2014. "I am a survivor so I feel like this is a very powerful way of intervening and creating a culture of care and consent in a way that is not punitive but transformative," Smith says.

PB Nicholson, an original Consent Kitty, understands his role as "making a community stronger, not smaller," through education. "We aren't about policing people. It's about making sure someone is better next time, is an ally next time," he says.

The Consent Kitties begin to create an environment of consent ahead of curtain call, advertising their presence on event promotional materials. On festival grounds they introduce themselves early in the day, passing out pseudo-flyers with consensual questions like "Can I Dance With You?" printed on them—which come in handy when the music gets loud enough you have to yell to be heard by the person beside you.

As the dance floor fills, the Kitties come into full action. Sometimes people just need to vent about an experience or be heard, but other situations might call for a Kitty to speak with offenders, who generally tend to be receptive. "A lot of people even thank us [because] they just aren't good a reading body signals," Nicholson says.

"When someone approaches us the first thing we do is hold space and let the person tell us what they want to do. We put the agency in their hands," Smith adds.

There are, however, cases of repeat offenders who don't correct their behaviour. "It can get to the point with drugs and alcohol that someone is past the stage of learning. That's when security would have to get involved, but that's a very small percentage," Nicholson says.

"Another thing we do," Smith adds, "is dance and have fun!"

The Kitties are not without their critics. Smith has encountered opposition to the Consent Kitties' mission and understands resistance as a misinterpretation of their message.

"We're not trying to restrict people from seeking intimacy, sexuality and connection with other people. We are actually extremely sex-positive. We just want people to come from a perspective of mutual respect and care," Smith says.

The Consent Kitties attribute their effectiveness to a "teaching not policing" mindset and grassroots approach. "Consent awareness is most effective when it comes from within the community and not an outside force," Smith says.

Over the last three years they have witnessed significant change in consent culture at music events, noting that not only are people more comfortable reporting a consent-breach, they are also better at recognizing when it happens.

Perhaps the greatest testament to their work is when they find their presence becoming less essential. Every time the Kitties leave a venue they leave behind a new litter of educated and empowered bystanders, affectionately referred to as All(e)y Cats.

As a new school year approaches and the dance floors of Halifax are flooded once again, it's good to remember, as Smith says, "consent is a fun and engaging thing, not a scary thing. It can be sexy and playful and not accusatory... and by being approachable we can make the subject approachable."