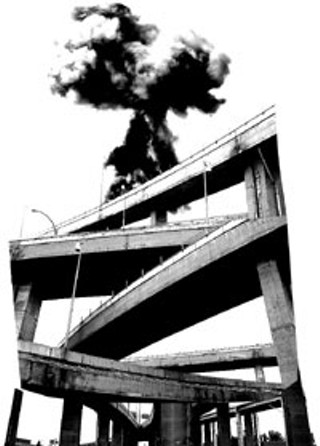 Dynamite would be a lot of fun. But probably the demolition experts would insist on something less cathartic: wrecking balls and such. Still, that sucker has to come down.

I’m talking about the Cogswell interchange: the tangle of concrete in the heart of downtown Halifax that serves no purpose save to remind us there was once a breed of city planner that waged active warfare against the populace and the environment.

Consider the idiocy of these plans, drawn up circa 1970: Build a six-lane highway, Harbour Drive, which will replace Water Street from the lower end of Cogswell Street to the Pier 21 area of the international terminals. From there, the highway will swing up across the peninsula straight through the historic south end, then bridge the Northwest Arm to Purcell’s Cove. A connecting highway will swing up to Highway 102.

It was car culture run amok: destroying neighbourhoods, cutting the waterfront off from downtown, relegating pedestrians to the dustbins of history.

Thankfully, an engaged citizenry derailed the project before much of it was built. But we’re left with a few stubs: Northwest Arm Drive remains a freeway to nowhere. On the waterfront, the courts building sits on an artificial bluff above the ferry terminal (the entire waterfront was supposed to be likewise jacked up), the flyway across Water Street is a bizarrely cruel token gesture to pedestrians and then there’s the Cogswell interchange.

Before the interchange was built, a tight grid of streets stretched up to a thriving business district along Gottingen Street. Afterwards, the north end was cut off from downtown and the Gottingen Street district began its long decline.

People have been talking about tearing the interchange down almost since the day it was built. “We discussed it with my students in 1975,” says Peter Klynstra, an urban planner who has taught at NSCAD. “We look at it every few years and come up with all sorts of ideas.”

Eight years ago, a developer hired Klynstra to work up a detailed proposal for the interchange. “We were going to take the bridges down. We’d end up with two city blocks—seven or eight acres—of new developable land.”

Those plans fell through, but Klynstra still advocates tearing the interchange down. Financially, demolition makes sense. In 1998, the cost of reconstructing the streets was $7-8 million, but that was more than offset by the potential sale price of the land, about $70 per square foot in downtown Halifax. Construction costs have since soared and so have real estate prices, to around $100 per square foot.

After last year’s Laval bridge collapse in Quebec, engineers took a look at all the city’s bridges. “The Cogswell interchange is about the same age and has some of the same design features as Laval,” says Dave McCusker, a planner with the city. “We looked at it and it’s safe, but this summer we’ll do some work on the joints and pivots.”

McCusker also sees no reason to keep the interchange standing. “We’ve recognized that it has more traffic capacity than we need or ever will need, so we’ve looked at replacing it with grade-level streets. It’s just a matter of cost.”

“Money. That’s what will finally bring it down,” says Klynstra. “It will become too expensive to repair and so they will tear it down.”

But why wait? If it already makes financial sense to tear down the monstrosity, why do we continue to tolerate this monument to environmental terrorism? Let’s get moving and tear it down now.