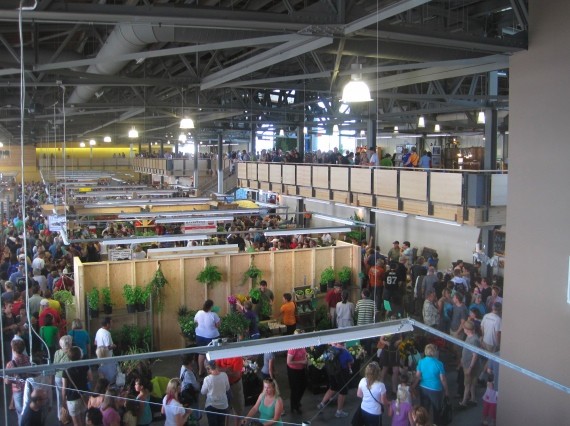 The Seaport Farmers’ Market is a community hub for downtown Halifax, that is, unless your community has a political message. In an emerging string of similar incidents, market management has given the cold shoulder to unrelated local activist groups.

Most recently, the artistic collective Puppets Et Cetera had to relocate its Mayworks Festival performance to Bishop’s Landing after market management took issue with the event’s migrant labour focus.

Initially, the market’s concerns with regards to the group, pre-event puppet-making workshop, were merely logistical: space, noise, clean up, and so on, says Margaret Anne McHugh of the Halifax-Dartmouth & District Labour Council, which produces Mayworks. It was only when Puppets Et Cetera asked if it could host its political performance at the market did market management throw up its arms.

“The perception to the general public may be that all our Market farmers may be involved with practices your organization deems exploitative,” wrote market operations manager Ewan Wallace in an email to McHugh. “The merest possibility that management could undermine the business of a farmer pursuing ethical labour practices is a risk that the Market cannot take.”

A market media representative brusquely turned down any questions from The Coast regarding community groups holding events in the space. No other market staff responded to requests for an interview.

Culture Not Convention has also had a tough time getting market management to be responsive. Early last year, the group was pushing Haligonians to consider alternatives for the convention centre money. It wanted to set up a table at the market for people to discuss how they would redirect these public funds, says member Catherine Abreu.

The market advertises a “community table” on its website, which is available every day to community groups that focus on health, environment, arts or education. No other criteria for application are provided.

Abreu says once group members finally organized the event with the market, they were stopped because they “hadn't been assigned a table properly.” So ,they secured a table again. Then, they were asked to get letters of support from the community. Letters in hand, management informed them tables were booked up for some time.

“It was a crazy rigmarole that resulted in us just giving up on the Seaport Market as a place to broaden our community engagement,” says Abreu.

Susanna Fuller never followed up on her case either. A member of the Deep Sea Conservation Coalition, Fuller decided last June to dress up in a fish costume and pass out buttons at the market. She says she never thought to ask permission because local groups were such a staple of the Historic Farmers Market and, in her experience, had never run into trouble.

Then she was asked by a Halifax Port Authority commissionaire to leave. Reasons given: zero.

None of the groups interviewed said they were presented with a formal market policy when they were turned down as to who can and cannot hold spread their activist gospel at the market.

“I think that that control thing is wrong and unfortunate,” says Fuller, “and it violates the spirit of an open marketplace, which I think is too bad.”

Has the market refused your local group? Let us know at news@thecoast.ca.