Updating and improving on the stale crests of the city’s post-secondary schools.


DALHOUSIE UNIVERSITY
Current arms: Based on the coat of arms of the Ramsay family of Scotland (because Lieutenant Governor of Nova Scotia George Ramsay founded Dal back in 1818), this seal swaps the Ramsays’ griffon and for two dragons, which flank a majestic eagle. And a unicorn! The university’s board of governors changed the logo from silver to gold in 1950 to better match Dalhousie’s official colours.
Current motto: Ora et Labora (“Pray and work”)
click to enlarge

Proposed arms: Have you heard about the fancy new impressive life-altering Dalplex? Us too, which is why we’ve made it the focal point of this new and improved arms, and given it the fierce protection of two tigers. (The university’s second-most popular mascot.)


SAINT MARY'S UNIVERSITY
Current arms: An open book bearing the university motto rests on top of a shield that’s marked with the insignia of the Society of Jesus. The shield carries two crowns—for the British Empire and the nation—and a thistle for the province of Nova Scotia.
Current motto: Age Quod Agis (“What you do, do well”) 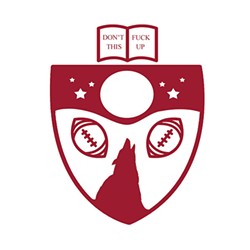 Proposed arms: A howling husky is subbed in for the thistle to shout out the varsity teams/mascot at SMU, and both crowns are replaced with the institution’s true royalty—footballs. The Society of Jesus logo must go, and a big full moon takes its place because of the university’s stellar astronomy department and the most impressive Burke-Gaffney Observatory.

UNIVERSITY OF KING'S COLLEGE
Current arms: The St. Andrew’s Cross, the crozier and the key are borrowed from the arms of the Diocese of Nova Scotia as are the trees, which indicate Prince Edward Island (why?), the provincial arms of which feature four trees. The paschal lamb is taken from the arms of the Diocese of Fredericton (also why?) and the crown gives a nod to Oxford University, King’s campus .
Current motto: Deo, Legt, Regi, (“For god, law, king and people”)

Proposed arms: The big brain and crossed fingers represent that yes, you’ll be a brilliant expert in newspapers and Early Modern things upon graduating, but will there be anyone who’ll pay you for your great genius? Maybe? Other details include an issue of The Watch, a pair of ill-fitting vintage jeans, a Garrison Irish Red for The Wardroom, some academic garb to represent those weird monthly formal dinners and that stack of FYP books that you never managed to read, but are pretty proud to display in your rez room.


MOUNT SAINT VINCENT UNIVERSITY
Current arms: The Mount pays tribute to the coat of arms of the family of Elizabeth Seton (who founded the Congregation of the Sisters of Charity) by featuring its three crescents, and Saint Vincent de Paul with the heavy use of blue and gold. The book represents knowledge, the maple leaves Canada and the dove symbolizes the holy spirit (“knowledge is a means of wisdom, the highest gift of ”).
Current motto: Veritas ad Deum (“Truth leads to god”) 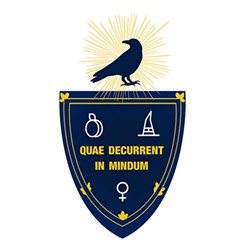 Proposed arms: Keep the Elizabeth Seton nod but replace the three crescents with a crow to represent the murder of them that haunts MSVU campus; a peach to represent the intense glute-burn that is walking from the Bedford Highway bus stop up Seton Road to Assisi Hall; and witch hat to represent the unfortunately named sports teams, the Mystics. Don’t forget a timeless tribute to the Mount’s mainly female enrollment, in Latin of course: Quae in or, “Who run the world?”

The Saint Mary’s University Art Gallery is not closing