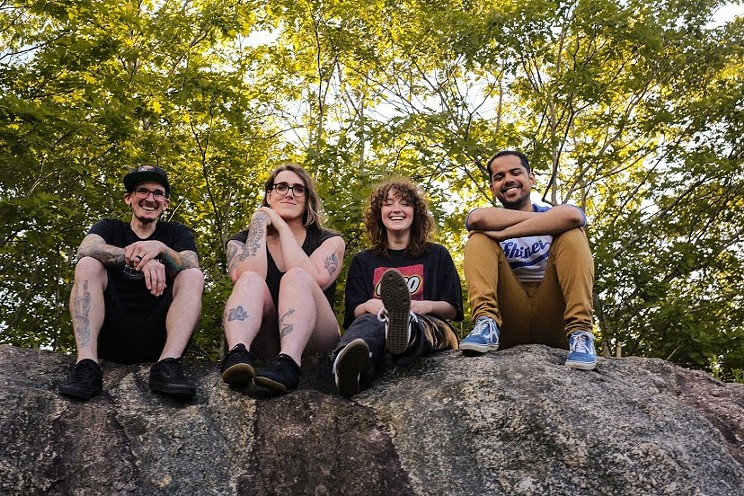 “I joke that the only thing I'm good at is playing music,” Matty Grace says. Hers is a quiet, deadpan delivery that belies her brand of anthemic, fuzzed-out punk that’s made her newest band, Cluttered, a nationally buzzed about act in less than a year—a meteoric rise fuelled in part by Against Me!’s Laura Jane Grace anointing the four-piece as “rad” in a tweet.

“Everybody's good at lots of things and people are multifaceted,” she adds. But, music “is the thing that I've always felt the most passion for.”

She’s right, of course: People are more than their work, even the prolific Grace, whose dedication to her craft means she’s forever summiting self-imposed Everests, like the time she penned an entire 18-song album in 48 hours.

A veteran of the city’s music scene since 2006 (Grace’s resume includes work in the local punk bands like Modern Cynics, Future Girls, Fat Stupids and Weekend Dads), Grace is as excited about her new band as music critics across the country are: “Cluttered is kind of the band I’ve always wanted; Like, the style of music I've always wanted to make. It takes a lot from a lot of the things I've learned from other bands, and how to write songs and everything, and puts it into a more cohesive idea,” she says, speaking by phone from a hotel room in Truro, where she’s taking in a packed Nova Scotia Music Week.

Soon, Cluttered—a lo-fi DIY punk outfit inspired by Against Me!, PUP and Worriers—will strike out on a Canadian tour, showing it’s more than the pandemic confines it was born into. A Halifax stop, the band’s first hometown gig, will be held at Radstorm on November 20. “Becca, our bass player, said to me last night that sometimes it feels more like we’re an away band,” Grace says, listing the fests she and fellow bandmates Becca Dalley, AJ Boutilier and Dylan Mombourquette have been able to perform at over the past summer, like SappyFest and Newfoundland’s Lawnya Vawnya.

“Developing in a punk scene and like, being a member of that community, it really teaches you a lot about autonomy and taking the power back so you can do things yourself,” they add. “I'm a member of Radstorm. I've been a member of Radstorm for a long time, and I'm really appreciative of that space—and the fact that space exists. And that's why we're doing our first Halifax show at Radstorm.”