“I have no idea if Halifax is ready for any of this,” the creator says of his “dark, funny, disgusting, sexy” play that runs Oct. 4-9.

By the time Cliff Cardinal’s one-actor show Huff reaches Halifax audiences (it opens today at Neptune Theatre as part of Prismatic Arts Festival, and runs until Oct. 9), it’ll be the 200th-and-change time the lauded playwright has retold the tale. “Over the years, Huff has become more of a known quantity,” Cardinal begins, speaking by phone with The Coast. “As people's consciousness and as the Indigenous theatre movement evolved.”


From the synopsis alone, a sense of its landmark status emerges: Huff follows two young, Indigenous brothers navigating daily life on a reserve—and navigating the grief of their mother’s passing. They develop problematic relationships with solvents. As Cardinal puts it, “Canada's most taboo subculture is young kids who abuse solvents and are at high risk of suicide, Indigenous kids who use solvents and are at high risk of suicide.” He adds: “It's not the Indigenous story of Canada. This is a very at-risk, disenfranchised minority population of people. And these are the same people that exist in every community: Disenfranchised children who are on the outskirts, who don't have anyone checking up on them. They exist in every community—but this is not the everyman’s show.”


Huff was Cardinal’s breakout work. In the years since, he’s crafted a radical retelling of Shakespeare’s As You Like It that wowed critics, published poetry, delivered Cliff Cardinal’s CBC Special and helmed the band Cliff Cardinal & The Skylarks—which he mentions is about to drop another album (to highlight just a few lines from his overflowing resume).


But it’s the non-everyman show that continues to stay ensconced in the zeitgeist: “It's been translated into French. It has a connection with a whole bunch of other people. I’ll tell ya: Hundreds of people have seen this show now. It’s been the story that has taken me around the world and has intermingled these people's imaginations and consciousnesses with my own,” Cardinal says. “It's become more than something that I thought of when I was alone in my house. It's become a real thread in people's lives, it’s become one of the stories that people have heard.” 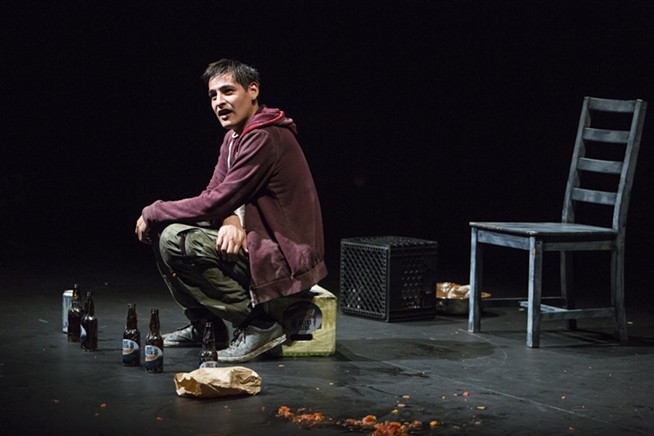 
And as the work has grown, so has the audience—and not just in numbers: “More and more people are showing up to the play who want to be there. Not just because it's an Indigenous play, but because they go ‘Oh, shit, I heard it’s dark, I heard it's funny. I heard it's gross and sexy. I want to see that.’ Not just like: ‘OK, all right, like, any Indigenous play’s on so we have to go see it.’ It's not like that anymore. You know, people, they know the difference between whether or not they're going to see a culturally specific work or a non-culturally specific work,” His voice crinkles with laughter: “And I say that it's completely not true. I have no idea if Halifax is ready for any of this.”


Ready or not, the play still comes—and Cardinal isn’t shy about who he hopes will fill Neptune’s seats on opening night: “I think people will see aspects, they will see themselves in the different portrayals. But it might not be parts of themselves that they want to see. It might take a certain amount of empathy for the audience to really come and get the bang for your buck. If you don't come with an open heart to a tough story, you're not gonna have a good time. If you don’t come ready to laugh, you’re not gonna have a good time. And if you’re not up for it, I don’t want you there.”


If that scares you off a bit, good: Cardinal’s work is the perfect antidote to today’s comfort viewing overload. But don’t mistake that for thinking the play is unapproachable:. “I'm just the kind of guy who likes to have a really funny show. Even if it's a dark show, I want it to be really funny. And I also want it to be disgusting. And I want it to be a little bit sexy and really, a full range of human experience…If you show up and you take an experience that's not on your own terms, and you allow yourself to be surprised—suspend disbelief—you might find yourself laughing. And if you laugh, you open up. Your chest opens up. And if you open up, I've got you.”


As the audiences change and grow, as the stage count of Huff continues to rise, the play itself has been a constant for Cardinal: “It's become more what it is. That's the same as a person changes. People don't change, they become more who they are. And so that's what's happened with the play.”