Class warfare and the Irving Shipyard

Nova Scotia's bosses would rather kill their own companies than negotiate with their workers. 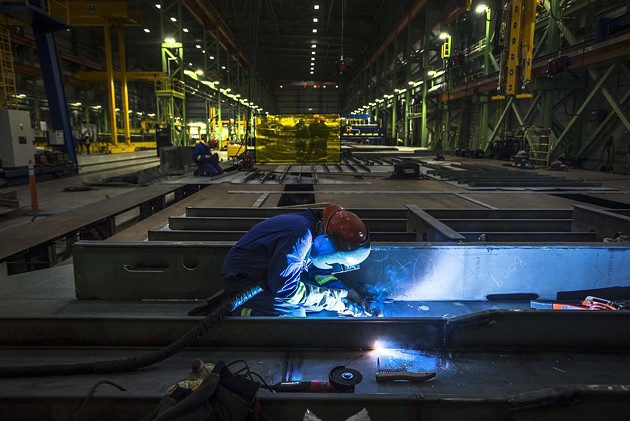 VIA UNIFOR
At work inside the Halifax Shipyard.
With the holidays coming to an end, negotiations between the Irving family’s Halifax Shipyard Inc. and its unionized workers are set to resume this month with the help of a mediator. In December, the workers, members of UNIFOR Marine Workers Local One voted overwhelmingly in favour of a strike mandate after the employer tabled a raft of demands for concessions on rest periods and safety regulations. The Irvings are the eighth richest family in Canada and despite amassing an unfathomably large fortune they’re now demanding that they get a little bit richer by trying to force 800 shipyard workers to give up a little bit more.

JALANI MORGAN
Chris Parsons (@cultureofdefeat) is a political organizer, health care activist and occasional writer from Halifax. He is the co-host of Dog Island, Atlantic Canada’s premier cultural-Marxist podcast.
We’re now four years into a prolonged period of obvious and open class warfare which has been waged from above. The history of capital and the state doing everything they can to bring working people to heel goes back centuries in Nova Scotia. But since 2013 the provincial government and private sector bosses have shed any pretence of accepting open negotiations and have chosen to use a combination of intransigence and exceptional legislation to break unions and suppress  wages.

The most notable labour battles have been in the public sector with teachers and water workers forced on to picket lines, zero provincial public sector contracts successfully negotiated and at least a dozen pieces of substantial anti-labour legislation passed since 2013. But private sector bosses have also changed tactics and decided that digging in their heels on even small issues is preferable to to compromise with their workers. From the Chronicle Herald to Egg Films, Nova Scotia’s bosses would rather cripple or kill their own companies than with their workers.

Here’s the thing about the economy: The divide between private and public industries is an artificial one and the Irvings demonstrate this better than anyone. Their wealth has come from public resources that the labour of generations of Atlantic Canadians has transformed into private profit. Technically, the  Irvings are a private employer, but the resource they extract comes from Crown land, travels on public infrastructure and is often sold to government entities.

Despite being worth over $7 billion dollars, the Irvings have parked that money off-shore for 45 years in order to make sure that they’ll never pay their fair share of taxes.

The Halifax Shipyard’s largest current contract is a deal to build warships for the  Canadian navy using taxpayer dollars. The procurement program is worth up to $40 billion. On the side, they’ve also got another contract worth $2.4 billion to build publicly financed Coast Guard ships in Halifax. These projects are being built in a facility whose upgrades were paid for by a $304 million gift from the provincial government and, for some reason, they were also given an absurd tax-break from the city of Halifax.

The refusal by the Irvings to negotiate a fair deal with their workers tells us a lot about the nature of the economy and about labour relations in this province, but it also tells us a lot about what the ultra-rich want. They don’t need any more money or power, but for some reason they want it and they’ll do whatever they need to do to get it. It’s up to the rest of us to stop them.