The pre-Centre Plan Willow Tree development to funnel $1.8 million into the fund. 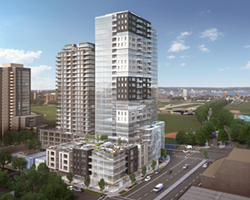 VIA HRM
A rendering of the proposed Willow Tree development.

The Centre Plan's fund for affordable housing will get its first influx of money after council voted Tuesday to approve a honking $1.8 million from Armco development group for the Willow Tree development on Quinpool Road and Robie Street.

The large sum stems from the development's plan to exceed 62 metres in height.

Though the sum will be the only non-Centre Plan contribution to the fund, it highlighted for some councillors their concern with the cash-in-lieu fund for affordable housing part of the Centre Plan. Councillor Tim Outhit worried that taking cash instead of ensuring affordable units in buildings could lead to segregation of lower-income and higher-income residents.  “The vision of this should be having the units in buildings, not ghettoization,” said Outhit.

Outhit's preference—called inclusionary zoning—wasn't an option when push came to shove with the Centre Plan, as the province wouldn't extend the life of those agreements beyond 15 years, which the city said wasn't sustainable. So density bonusing—a system of charging extra fees that go toward 'community efforts' in exchange for allowing buildings to be over 2,000 square feet—became the decided solution.

Councillor Waye Mason argued for the density bonusing fund, saying it was the best way for the city to guarantee effective long term action on affordable housing. He added that his understanding is the money would have to be spent in the regional centre which should decrease the chance for potential segregation.

The Willow Tree development is technically separate from the Centre Plan, but after being unable to make the originally intended 20 affordable units work, their agreement meant they had to give $1.8 million towards affordable housing, kick-starting the city's Centre Plan fund.

Staff are currently working on how the municipality will distribute the money once it starts coming in. Principal Planner with HRM Kasia Tota says they plan is to spend contributed money within the regional centre, and that funded projects will likely be mandated to have varied affordability of units in the buildings. The detailed plan will return to council within six months of the Centre Plan's package A passing.

Council also voted Tuesday to approve a $33,000 survey to address gender parity and diversity, which will inform the employee equity program­—an area that Halifax lags behind other cities on. The Coast reported that based on salaries for HRM staff earning over $100,000 in 2018-19 four-fifths of the top earned dollars go to men, and on average men earned $30,000 more than the women on the list.

Councillor Tim Outhit also succeeded in getting council to shut down staff's proposed bus route 91—Hemlock Ravine, citing traffic concerns. The alternative—direct the CAO to change the current routing proposed or ad hoc traffic calming measures—passed. HRM will have to work quickly to take down and change signage for the route that was ready to go or already up—or make sufficient last-minute traffic-calming efforts in the area.