Report advises “no further action” be taken on idea. 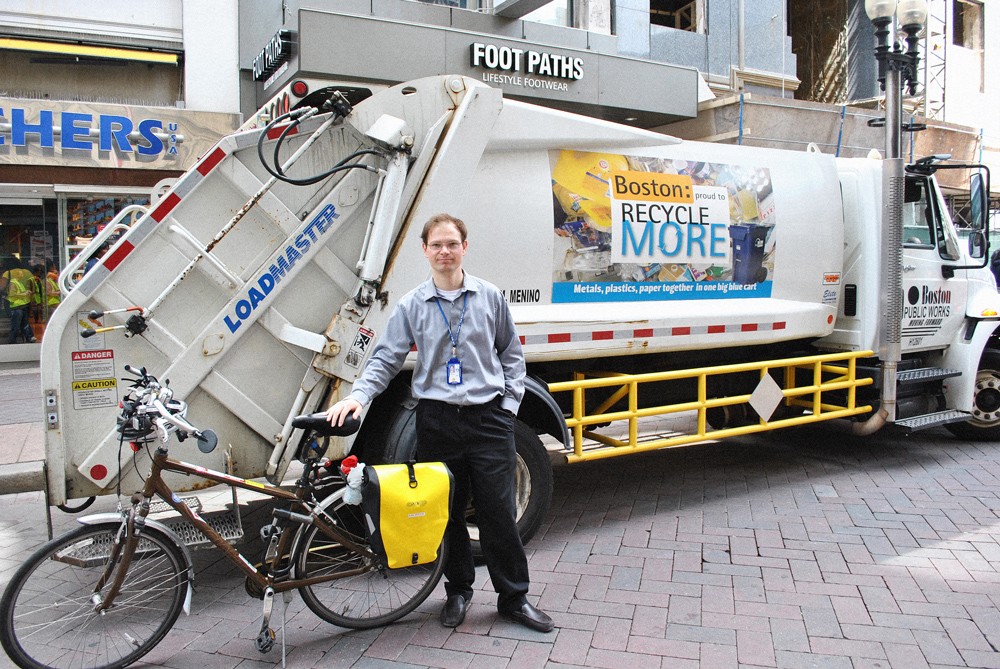 Via New Urban Mechanics
A garbage truck in Boston, where side guards are required on Public Works vehicles.

The potential lives saved by truck side guards isn't enough of a reason to install them on municipal vehicles, says HRM staff.

That’s the recommendation from a staff report going to Thursday’s meeting of the Transportation Standing Committee which recommends “no further action” be taken on the idea of side guards on all city-owned heavy trucks and plows, as well as on vehicles belonging to long-term HRM contractors (such as garbage trucks).

Side guards are barriers attached to the sides of heavy trucks that are meant to reduce the severity of collisions by blocking the space below the vehicle, causing any colliding cyclists and pedestrians to bounce off rather than being crushed underneath.

Their use has long been required in Europe and Japan, and they're growing in popularity in North America. Ontario’s chief coroner has called for the mandatory use of side guards after reviewing the deaths of 129 cyclists since 2006, and cities like Montreal and Boston have started requiring side guards on city-owned and contracted trucks. New York is also phasing in side guards on 10,000 public works vehicles by 2024.

There were renewed calls for the use of side guards in Halifax after the death of cyclist Johanna Dean. The 30-year-old elementary school teacher was biking on Windmill Road in Dartmouth two years ago when a truck turned right, colliding with her.

Thursday’s five-page staff report acknowledges side guards helped reduce cyclist fatalities in the United Kingdom by 61 percent (and pedestrian fatalities by 20 percent), but claims there is no way to accurately quantify their potential to help reduce violent accidents. The author of the report, Beate Shannon from Transportation and Public Works, practically dismisses the guards as being any help at all in improving road safety.

“Side guards alone will not eliminate serious injuries,” Shannon writes. “City buses have lower built-in side skirting than side guards found on most trailers yet there are still incidences of pedestrians and passengers being killed as they slip and fall under the wheels of moving city buses.”

Sam Austin has written about this very issue for Spacing Atlantic, and he's critical of staff's flawed recommendation.

“The HRM report cites the UK data, but it doesn’t convey the whole story,” Austin writes in a letter sent to the Transportation Standing Committee and shared with The Coast. “After the UK introduced side guards in 1986, the number of deaths and serious injuries from side-impact collisions fell dramatically, while the number of minor injuries increased. People were still getting hit by trucks, but more of them were walking away.”

Transport Canada disputes those UK findings, though. In an email sent to the Toronto Star, communications advisor Mélany Gauvin says the transportation regulator doesn’t support the need for side guards in Canada and “has been unable to find any European studies that conclusively demonstrate the effectiveness of side guards in preventing casualties.”

A Canadian study on side guards was conducted in 2012 by the National Research Council, but scrapped before it could enter its second phase of testing. Transport Canada claimed the initial research showed no evidence the guards were effective and so there was no reason to continue the study, but internal reports obtained by the Globe and Mail found otherwise.

Thursday’s staff report estimates that installing the guards on the roughly 100 heavy-duty trucks in HRM's fleet would be a one-time cost of $350,000-$400,000, along with any increase in annual maintenance.