@WayeMason Twitter
Councillor Mason tweeted this floorplan of “the modular units HRM is purchasing to create safe and appropriate spaces for the houseless.”

HRM emergency manager Erica Fleck: “We have purchased 24 modular units that can provide accommodations for up to 73 individuals.”

The assistant chief of emergency management for HRM usually deals with the fallout from hurricanes, power outages and nor’easters. Erica Fleck has been in that position since 2017, but the duties of the job largely changed earlier this month when Fleck was assigned to what the city calls “a three-month role leading the emergency response to homelessness for the municipality.”

Now a week and a half into her new position, Fleck took a seat beside HRM mayor Mike Savage on Wednesday morning, September 29 during a press conference to give details on the city’s involvement in assisting unhoused residents.

City council report: Housing is never far from council’s thoughts: But at its next meeting, urban chickens are coming back to council.

“Erica has had long conversations with residents, volunteers and with service providers at the park,” said Savage. “Our goal is to deal with everybody in a way that suits their needs.”

Savage went on to explain the city’s recent efforts to address the housing crisis, including allocating $500,000 to emergency support services for housing on August 31, as well as more recent motions from Tuesday’s council meeting to provide portable showers and doubling the affordable housing grant program to $400,000, as well as adding Fleck to the file full-time.

But the mayor then explained that the city doesn’t have all the resources it needed to address the complexities of the housing crisis.

“The city, we don't have the appropriate skill sets and the capacity to manage the complexities of the unhoused population,” he said. “We don't have social workers, mental health services or addiction support. These are forces of the province of Nova Scotia. It is the province, not the municipality, that funds social housing, particularly shelter for those hardest to house.”

Fleck told reporters the municipality is in frequent talks with the province about legislation, funding and broader solutions. 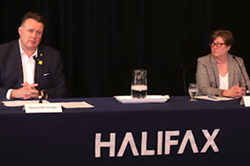 The Coast
Mayor Mike Savage, left, and Erica Fleck, HRM’s assistant chief of emergency management, at a press conference Wednesday, Sep 29.
“The municipality has had a series of productive meetings with the province of Nova Scotia as well as the professional service providers that the mayor mentioned,” she said. “And also volunteer groups to help ensure that occupants of the homeless encampments are offered alternative and safe temporary accommodations.”

Recently, the city transformed the Gray Arena in north end Dartmouth to temporarily house residents who wished to stay there. Fleck says there is capacity for 30 people to stay there, and the longer-term plan is to move people into “modular housing” units at locations in Halifax and Dartmouth that have yet to be finalized.

“We have purchased 24 modular units that can provide accommodations for up to 73 individuals,” said Fleck. “They are trailer-like structures, there are some bunkhouses that house eight-to-10 people.”

On Friday morning, downtown Halifax councillor Waye Mason tweeted floorplans of the modular housing units with details that were not revealed at the meeting.

Folks have asked about the configuration of the modular units HRM is purchasing to create safe and appropriate spaces for the houseless. The units look like this, each bedroom is a single w. a desk, bathroom w. shower. Shared laundry and kitchen in each setup. pic.twitter.com/ooyQoN9Pdf

Police and city staff tear down pantry at People’s Park