Halifax makes changes to workforce regulations as use of the discriminatory practice continues to increase in the private sector. 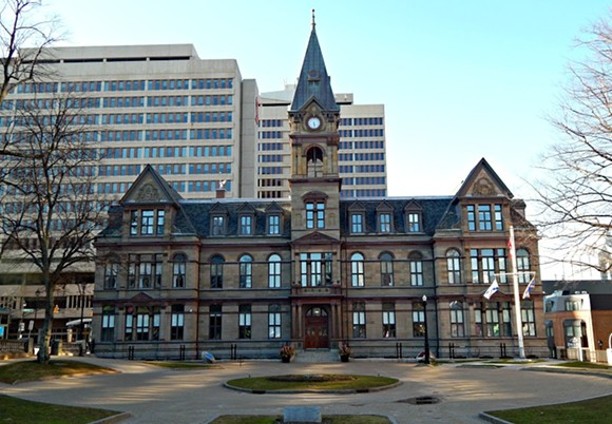 DANIELLE CAMERON
City hall employs a workforce of over 4,000 employees.

As anyone who’s ever pounded the pavement (or keyboard) in search of employment knows, job hunting can be a profoundly dispiriting exercise.

For the nearly four million Canadians who’ve served sentences meted out to them by the criminal justice system, there’s an additional barrier. Canadians with criminal records have little protection from discrimination by potential employers.

Yet at least some institutions are trying to head in a different direction.

In the past year, HRM has adopted new practices on criminal record checks—a change precipitated in part by community groups raising concerns with the barriers to employment for people with criminal records.

“A year ago we looked at—recognizing how restrictive [record checks] can be, and recognizing the fact that people can make mistakes, either in youth or later on—that we introduce a modified solution.”

The solution has included looking at whether a criminal record check is in fact required for a position working with HRM. If it is, the municipality uses a new framework to assess offences, which includes the seriousness of the charge, the amount of time that’s elapsed since it happened and the age of the individual at the time.

“We want to look, as an employer within HRM, at being more inclusive overall,” says Burgess, “and that means recognizing that there could be various factors that could result in a mistake occurring, and it shouldn’t prevent an individual from seeking employment.”

Despite the changes, there's still a lot of room for the city to ask for different forms of record checks. For instance, a parks and recreation employee who works at the beach could be asked to submit a vulnerable sector check—a more involved kind of record check required to work with vulnerable people—since beaches sometimes contain children.

But Burgess still calls the change a “dramatic shift” relative to what's being seen from other governments and employers in the private sector.

According to groups like the Canadian Civil Liberties Union, the use of criminal record checks as a screening tool by those entities is on the rise.

“We see very clearly in our work the impact of not just requiring a criminal record check, but that you not have a criminal record at the end of that,” says Martha Paynter, with the non-profit Women’s Wellness Within.

Women’s Wellness Within provides support to criminalized women and advocates for better conditions. The organization recently launched a campaign calling for, among other things, an elimination of the barriers and stigma directed towards people with criminal records.

“It’s fine to ask somebody about their past, if your response to that is always going to be understanding and compassionate,” says Paynter. “But that’s not always the reality.”

A recent survey of employers in Toronto by the John Howard Society of Ontario found that 60 percent ask for record checks and that 15 percent have a blanket ban on hiring anyone with a criminal record.

Based on an informal review of practices in the region conducted last year by HRM, Burgess says the municipality realized its requirement for criminal record checks could be creating a negative social impact.

“As an employer of over 4,000 employees, we thought that we could be kind of setting the benchmark in terms of an alternative practice.”

Burgess says HRM doesn't yet know how much of a difference this change in policy has made for people with criminal records—after all, not knowing who has a criminal record is the point. Nonetheless, he said HRM will be looking to gauge the impact of the change in coming years.

“I think the key for us, is it was such a dramatic change in terms of what other organizations do have in place, so it’s important for us to really assess the success of it over a couple year period and see if there are any other barriers that are still being created.”