After a messy rollout, the dream of a car-free Spring Garden Road is dead for now

On Monday, July 4, a stretch of Spring Garden Road switched from being a car-filled city street, to only allowing buses and bikes—in theory at least. Thursday, three days into the city’s year-long pilot project, Spring Garden still resembled its old self. As it turns out, the city was having trouble getting drivers to stop using the road. Then out of the blue on Friday afternoon, the city announced it would pause the project to reassess, just four days after it began.

Plan for car-free Spring Garden Road crashed hard at launch but will be back soon: “This was a very high-profile failure,” says councillor Waye Mason, “but it doesn't mean the idea is wrong and we shouldn't be trying.”

According to the original plan, Spring Garden Road from South Park to Queen Streets would be closed to personal vehicles from 7am to 8pm every day until next June. Buses, bikes and the Harbour Hopper could still get through. “Bus-only lanes help to make transit more reliable. Less traffic means less noise, cleaner air, and a better pedestrian experience,” reads a press release from the city.

But maybe it was too good to be true.

"The municipality intends to re-evaluate the current traffic control measures to recommend alternative methods to communicate and enforce the pilot initiative," reads a Friday press release from the municipality. The car-free pilot was approved back in December, so you'd think the city would have had time to plan a smooth rollout. The first days of the now-defunct project were anything but. 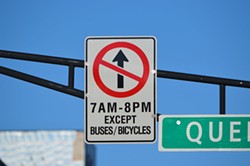 On Monday, the only indication anything about Spring Garden had changed were small road signs, which were largely ignored. Halifax Regional Police showed up later in the day to hand out informational pamphlets to confused drivers. On Tuesday and Wednesday, the road remained car central, according to cyclist Ben MacLeod, who’s been monitoring the project. On Thursday, when The Coast visited Spring Garden, giant signs had been erected on both ends of the street, and a bylaw officer was at the South Park intersection to point drivers in the right direction. (The signs have since been taken down, less than 24 hours after they were put up.) But as soon as the enforcer was gone, MacLeod tells The Coast, the cars returned.

Logan Attwood
The city's sign on the right, a local resident's traffic cone on the left. One of these measures was effective.

Then on Thursday afternoon, resident Logan Attwood took matters into his own hands. He grabbed an orange pylon from a nearby construction site and placed it in the middle of the lane leading onto Spring Garden. “I was frustrated the signs weren't visible to drivers operating on autopilot,” he says. Attwood thought the pylon would prompt drivers to pay more attention—and it worked. “It went from a 25% compliance rate to 90%,” he says. Regardless, MacLeod did catch a video of cars going around the cone and entering the car-free corridor.

Going into the Spring Garden change, Halifax Regional Police figured it would take some time for our personal-vehicle-oriented friends to adjust. The police plan was to opt for education, and switch to enforcement if necessary. “We encourage citizens to educate themselves on the new regulations,” HRP constable Nicolas Gagnon, acting public information officer, told The Coast in an email on Thursday, when the project was still happening.

Before Friday the city was of a similar mindset, saying this education stage would last a few weeks, and it would be looking for creative ways to make the new rules more clear. “The municipality is accessing additional resources and design changes to further support the education and enforcement of this change, and users will likely see some adjustments along the corridor in the coming days," a spokesperson for the municipality wrote in an email Thursday.

But it looks like the city has gone back to the drawing board. Maybe the second attempt at a bus-only Spring Garden will work out. If a single traffic cone can do the job, a whole municipality must be able to find a solution.

I suck at surfing, but I love it